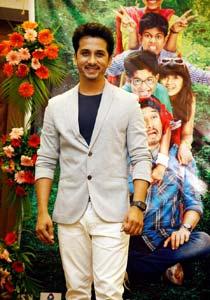 Details : Abhijeet Khandkekar, a promising young actor may not have much films to his credit, but his awesome performance in ‘Jai Maharashtra Dhaba Bhatinda’  has made his presence felt in Marathi film industry. Abhijeet’s next film ‘Mamachya Gavala Jauya’ with Mrunmayee Deshpande is due for release. Apart from this film, Abhijeet is also doing ‘Dhol Taashe’ with Hrishita Bhatt and Jitendra Joshi and one more film of Chandrakant Kulkarni, which will be releasing soon.

Prior to entering the world of cinema, Abhijeet worked as a Radio Jockey for ‘Radio Mirchi’ in Pune city. However, things do not remain the same for this young RJ after he won the ‘Maharashtrache Superstar’ a talent contest, which fetched him lead role in Balaji’s Marathi TV serial ‘Majhiya Priyala Preet Kalena’. Later, Avadhoot Gupte gave him his first break in Marathi films, through ‘Jai Maharashtra Dhabha Bhatinda’. Today, Abhijeet seems to be a well settled youngster in film industry, and is happily married to Sukhada, his friend on social networking site.