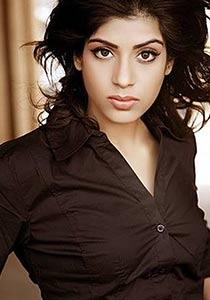 Details: Popularly known as Saloni Deshmukh for her female Police Inspector’s role in the popular TV serial ‘Lakshya’, Aditi Sarangdhar reached every Maharashtrian household during the past two years. Prior to that, Aditi had performed in many Marathi films. As a stage actress, she has already won awards for her outstanding performance in Marathi play ‘Proposal’. Aditi, daughter of Dr. Dipak and Shaila Sarangdhar is originally from Kalyan.  Last year, Aditi married Suhas Revandekar. She graduated from Mumbai’s Ruia college, which is a cultural hub for Marathi theatre. Since childhood, Aditi has taken keen interest in acting. To explore her acting talent, she got the right platform; and since then she has never looked back.
Her actual acting career began in Kalyan, when she performed in Nishikant Kamat’s experimental play 'Litmus'. Later, Kanchan Adhikari offered her 'Damini'. Aditi also performed in the female version of Devendra Pem's 'All The Best' and thereafter Zee Marathi's 'Vadalvat' brought her name and fame. Aditi also loves to design her own dresses. And, she has done it in many of her films and serials.
Her film, ‘Hou de Jarasa Ushir’ produced by Biroba Production and directed by Wasim Maner had competed for Oscar nomination. Aditi has played the character of  Monali Mohite in this film. Today, she is one of the leading actresses in Marathi entertainment industry.