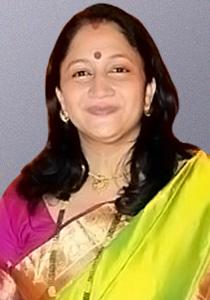 Details : Alka Kubal  is a big name in Marathi film industry. Popularly known as tragedy queen of Marathi cinema, she has spent almost 30 years in Marathi film industry, since her debut in ‘Vahinichi Maya’ in 1985. Most of her films were about the sufferings of a woman. Her maximum films were released during 90s, when she worked with noted actors like Dada Kondke, Ashok Saraf, Sachin Pilgaonkar, Laxmikant Berde, Ramesh Bhatkar and others.

Before her debut in Marathi film industry, Alka had worked in Hindi film ‘Chakra’ with Naseeruddin Shah. Later, when she was busy with Marathi films, she also did a devotional Hindi film on ‘Shirdi Ke Sai Baba’. Her film ‘Maherchi Saadi’ was a super hit, which earned her name and fame. Alka has performed in about 35 Marathi films, besides few Hindi films.  She is married to the cinematographer Sameer Athlye.

As a producer, Alka has made two films ‘Aamhi Ka Tisre’ and ‘Agnipariksha’.

She has won many popular awards in her acting career.