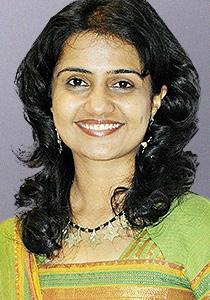 Details : Amruta Subhash is a multitalented Marathi actress. Besides acting, she is also a playback singer, composer and Bharat Natyam dancer.. Like her mother Jyoti Subhash, Amruta also took her lessons of acting at National School of Drama, Delhi, where Satyadev Dubey was her guru.  After doing theatre in Delhi, Amruta returned to Maharashtra, and did Marathi play ‘Tee Fulrani’. She featured in many Marathi films and television series in supporting roles and then moving into lead roles.

Amruta made her debut in Marathi films through the 2004 film ‘Shwaas’, playing the prominent role of Aasawari, a medical social worker.  She later performed in many Marathi TV serials like ‘Zoka’, ‘Paaulkhuna’ and ‘Awaghachi Sansaar . She became popular for her role of Aasawari, opposite actor Prasad Oak, where she fights back the atrocities laid upon her by her husband. Amruta has also performed in many Hindi films. But, her Marathi film ‘Valu’ Directed by Umesh  Kulkarni, had a good star cast of  Atul Kulkarni, Mohan Agashe, Bharati Achrekar, Girish Kulkarni, Dilip Prabhavalkar and many more actors. The film also featured Amruta’s mother Jyoti Subhash. Some of her good films were ‘Tya Ratri Paus Hota’, ‘Gandha’ and ‘Masala’.

Amruta is married to director Sandesh Kulkarni. She received the V. Shantaram Award for her role in the film ‘Savalee’ and National Award 2013 for Best Supporting Actress for her film 'Astu' (Marathi) directed by Sumitra-Bhave Sunil Sukhtankar.