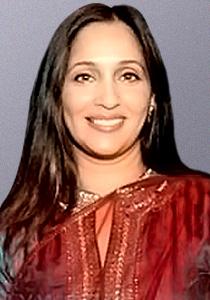 Details : Ashwini Bhave is one such Marathi actress, who began her acting career on Marathi stage, followed by Hindi Sci-Fi serial Antariksh, from where she got into Marathi films in 1986, followed by super-hit movies such as Dhadakebaaz, Ashi Hi Banwa Banwi and Kalat Nakalat opposite top Marathi movie stars like Laxmikant Berde, Ashok Saraf, Sachin and Vikram Gokhale. But, as a young girl, Ashwini had also performed in popular Marathi stage play ‘Gaganbhedi’ and toured many parts of the world, with the group.

Ashwini’s best time came, when in 1991 she made her Bollywood debut as second lead opposite Rishi Kapoor in the Hindi movie ‘Henna’ directed by Randhir Kapoor under the RK Films banner. Subsequently she starred in other Hindi movies. However, her love for Marathi brought her again to television and Marathi movies. Though she acted in Kannada films, she also played the lead role in a famous Marathi stage play ‘Lagnachi Bedi’. In 1993, she played the character of a mother to Saif Ali Khan in the Yash Chopra movie Parampara and later in 1998 performed in multi starrer film Yugpurush. Ashwini has performed with top leading actors of Bollywood like Rishi kapoor, Akshay Kumar and Vinod Khanna.

‘Vazir’, ‘Sarkarnama’,’Ahuti’, ‘Halad Rusli Kunku Hasle’ & ‘Ek Ratra Mantarleli’ were some of the Marathi films she did, before her marriage  to software engineer, Kishore Bopardikar.  Later, she migrated to US; but is still in touch with Marathi films. In 2007, Ashwini produced her own film ‘Kadachit’ also playing the lead role in that film. Last year, we saw her performing an important role in ‘Aajcha Divas Majha’

Ashwini received the best actress awards from Govt. of Maharashtra for her performance in film 'Aahuti' in 1994 and also for the role in drama 'Purush' (in Hindi) in 1993.