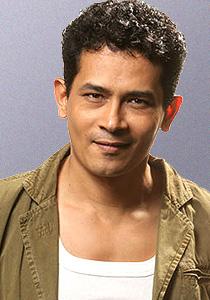 Details : It is difficult to believe that Atul Kulkarni is 50 years old. But, he is still active and looking fit enough to play the roles of a hero of Marathi films. We have noticed him perform with total dedication to his character in films like ‘Natarang’, ‘Popat’, ‘Eka Lagnachi Goshta’ and now his new film ‘Happy Journey’ directed by Sachin Kundalkar is set for release in 2014.

Even otherwise, Atul has given some memorable performances through Marathi films like ‘Valu’, ‘Kairee’ , Dahavi  Fa’, ’Devrai’, ‘Chakwa’ and ‘Vastupurush’. Besides acting in number of Hindi films with big stars like Amitabh Bachchan, Aamir Khan, Ajay Devgan, Kamal Haasan, Tabbu and Raveena Tendon, he has also performed in number of south films. For Atul, his role is important for him and not the language of communication. Atul has won National award for best supporting actor, twice; once for ‘Chandni Bar’ and then for ‘Hey Ram’.