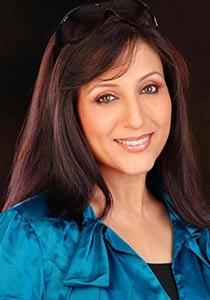 Birthday : 23 April
Details : Kishori Shahane was crowned with Miss Mithibai beauty pageant award of her college when she was only 17 years old. In those days, she was actively taking part in cultural events. She was also an eminent classical and folk dancer and actress. Soon thereafter, she performed in stage plays like Moruchi Mauchi (Marathi) and Aadhe Adhure (Hindi). Kishori then entered Marathi and Hindi serials, followed by films. She shot into fame with films like 'Maherchi Saadi' and 'Wajva Re Wajva'. For the past 2 years, she has been performing in Marathi films alongwith Hindi films and television.
Kishori married  Hindi filmmaker Deepak Balraj Vij. She also turned a  producer, who helped to make a film about the life of Sai Baba of Shirdi. As a filmmaker, her Marathi film ‘Mohatyachi Renuka’ received Maharashtra State Award 2007 for best editing. The film was produced and directed by Kishori herself. Kishori also produced another Marathi film 'Aika Dajiba' with top Marathi stars.
Kishori has worked in super hit Marathi films like 'Ek Daav Dhobi Pachad' and Navra Majha Navsacha. Recently, we also saw her playing important character roles in films like ‘Yeda’, ‘Ekulti Ek’ and ‘Natee’.