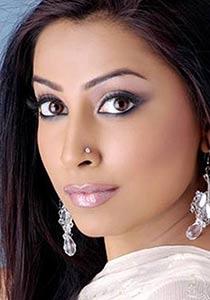 Details : Kranti Redkar is a well known Marathi film, television and stage actress. She shot into fame, when she performed a dance on the popular song ‘Kombdi Palali’ from the film ’Jatra’. The same song made on the music of Ajay Atul was later transformed into ‘Chikani Chameli’ and picturised on Katrina Kaif in the film
’Agneepath’. However, the original dance performed by Kranti had its own flavour. Kranti made her debut in Marathi films, through 'Soon Asavi Ashi' in the year 2000, opposite Ankush Choudhary. Later, in the year 2003, she also played an important character of a kidnapped girl – Apoorva,  in Prakash Jha's Hindi film 'Gangaajal'. Kranti has also performed in few Hindi serials, besides performing in Marathi films and a Marathi comedy  serial. She is a good mimicry artiste also.

At present, she has turned to direction and has completed shooting of her film ‘Kaakan’ starring Jitendra Joshi and Urmila Kanitkar Kothare. Some of her best performances were in films like ‘On Duty 24 Taas’, ‘Kuni Ghar Deta Ka Ghar’, ‘Pipani’, 'Shahanpan Dega Devaa’,'Full 3 Dhamaal’ & ‘Shikshanachya Aaichha Gho’.