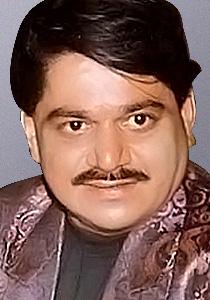 Details: Lakshmikant Berde, who was called the king of comedy in Marathi cinema, during 80s and 90s, having entertained not only Marathi audience, but also, reached heights of popularity in Hindi films. Known for his spontaneous reaction and body language at any given situation in the film, he was described as the best comedian star of Marathi films.

Lakshmikant, who was interested in acting, first began participating in dramas during the cultural activities for Ganesh festival celebrations performed at Konkanasth Vaishya Samaj, Girgaum. He had already won awards for participation in inter-school and inter-college drama competitions. Later, he started his acting career with the Mumbai Marathi Sahitya Sangh, sometime during early eighties and found his first major break through Purushottam Berde's Marathi stage play ‘Toor Toor’, which became a hit and that is how Lakshmikant came into limelight.

Lakshmikant Berde’s first TV appearance was in Doordarshan’s Marathi program ‘Gajara’, where his famous mimic style came before the home viewers. Later, he made his movie debut with the Marathi movie ‘Lek Chalali Sasarla’. Thereafter, there was no stopping for him, till Mahesh Kothare’s film ‘Pachadlela’. His pairing with Ashok Saraf gave many hit films. His pairing with Priya Arun was well received in many films. He was also a favourite of film makers like Mahesh Kothare and Sachin. Lakshya, as he was popularly known to the Marathi film industry, passed away on 16th December 2004, at the age of 50, due to a kidney ailment. But, his 100 plus Marathi movies which are shown on different Marathi TV channels, still receive good response from home viewers.