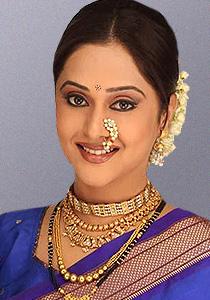 Details: She was just 16 years old, when she made her acting debut as Ramabai, the wife of Madhavrao Peshwe in the popular TV serial ‘Swami’. Thereafter, Mrinal focussed her attention on her studies and finished her graduation and the Masters degree in Linguistics, from Pune University. Then it was time for her marriage with her childhood friend Ruchir Kulkarni . Mrinal is the granddaughter of G.N.Dandekar. Her parents Mr. Vijay Deo and Dr.Ms. Veena Deo are both connected with teaching profession and writing.  She married her childhood friend Ruchir Kulkarni, after finishing her Master’s degree. She has a son Virajas.

Mrinal returned to acting when she was pregnant, with the TV serial Shrikant, based on one of Saratchandra Chatterjee's novels. But, after that she took a break, till her son Virajas was 2 years old. Sanjay Khan’s offer for his historical TV serial ‘The Great Maratha’ brought Mrinal back to acting, when she played the role of Ahilyabai Holkar. Later, it was her debut in Marathi film ‘Jamla Ho Jamla’. But, her performances in TV serials Draupadi, Hasratein, Meerabai, Teacher, Khel, Sparsh, and Sonpari, made her popular among home viewers.

Mrinal did few more films like award winning ‘Jodidar’, Dr.Babasaheb Ambedkar’ and ‘Veer Savarkar’. However, it was her return to Marathi serial ‘Avantika’ that brought her name and fame. Now, Mrinal has turned director. Her debut film was ‘Prem Mhanje Prem Asata’, and her next film ‘Rama Madhav’ is due for release.