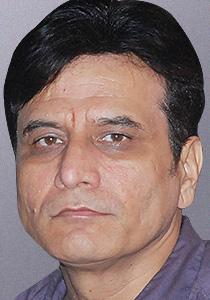 Details : Sandeep Kulkarni is the most versatile actor in Marathi film industry. Having also performed on stage, television and in Hindi films, he is also a Marathi actor who has acted in three National award winning films, namely - Shwaas (2004) which was also India's official entry to the Oscars. Then, Dombivali Fast (2006); and also Traffic Signal (2007). He won three Maharashtra State awards in the Best Actor’s  category for Shwaas in 2004, Dombivali Fast in 2006 and Adhantari in 2005. He won the best actor award in the Nigerian Film Festival for his critically acclaimed performance in the film ‘Ek Daav Sansaracha’ in 2009.
Born in Pune, to  Shrikant Kulkarni and mother Lata Kulkarni, he later did his early schooling in Mumbai.  But, after finishing school, he decided to become an 'artist’ and graduated from Mumbai’s  Sir J. J. School of Art.
Initially, he was nurtured as painter and also took active part in group monsoon show. The first exhibition of his work was on display at the Jehangir Art Gallery in 1986, after he completed his degree Bachelor of Fine Arts. Simultaneously, he also pursued acting workshop with Pt. Satyadev Dubey and then for next four years, he performed theatre through his group in English, Hindi and Marathi. After performing in TV serials, his film career began with Shyam Benegal’s film ‘Mammo’ in 1994. This was followed by his association with film makers like Govind Nihlani and Sudhir Mishra.
But, in 2004 and 2005 saw his entry into  Marathi films, through films like ‘Shwaas’ and ‘Dombivali fast’. And, since then for the past 10 years, there has been no stopping for him.