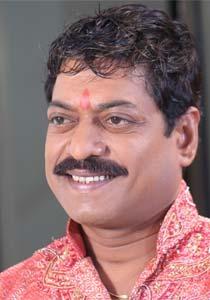 Details: For the past 15 years, he has been entertaining the Marathi audience, through his variety of roles performed on Marathi stage and films. Known for his best timing for comedy and his peculiar style of dialogue delivery, Sanjay Narvekar has always invoked instant laughter among the audience. While successfully managing his Marathi plays and films, Sanjay has also been able to find time for his Hindi film assignments. He began his career in Hindi cinema with that famous character of ‘Dedh footiya’ in Mahesh Manjrekar’s ‘Vastaav’ fifteen years ago, and even today he performs with the same enthusiasm and energy.

Sanjay’s pairing with Bharat Jadhav did well in Marathi films. ‘Chal Lav kar’ and ‘Khabardar’ are the best examples. Through his wonderful performances in Marathi  plays  ‘All the best’, ’Lochya Jhala Re’, ‘Hamidabaichi Kothi’, ‘Zol Bachchan’, ‘Tedha hai Par Mera hai’, he has been able to create a big fan following. Born in Konkan, Sanjay presently resides in Mumbai with his wife and son. Recently, his son Aryan made his debut in Marathi films as a child artist with ‘Bokya Satbande’.