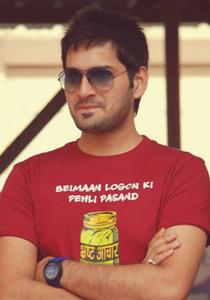 Siddharth Chandekar made his debut as a lead actor in Marathi films in 2010 with Avadhoot Gupte’s ‘Zenda’. However, he had made his screen debut much before with Hindi film ‘Hamne Jeena Sikh Liya’  in 2007, along with Marathi actress Mrunmayee Deshpande. Siddharth gained popularity with his character of Neel in the mega television serial ‘Agnihotra’.

Siddharth later appeared in films like ‘Satarangee Re’, ‘Balgandharva’, ‘Doosari Gostha’ and recently released film ‘Bavare Prem He’, in which he played a romantic hero. Though the talented actor has not given any big hits till date, he is confident that things will not remain the same post release of his much awaited movie ‘Classmates’ followed by ‘Sata Lota’ early next year.