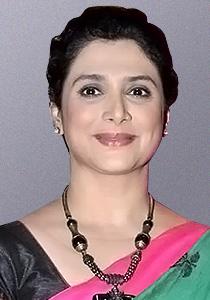 Details : Popularly known as Supriya in the film and television industry both in Hindi as well as Marathi, Supriya was born in Mumbai in Sabnis family. Supriya made her acting debut through Marathi play ‘Mahatare Arka Baiyit Garka’. It was Sachin Pilgaonkar who spotted her and that's how, Supriya made her debut through his film ‘Navari Mile Navryala’ in the year 1984. And, while doing this film, she met her future husband in Sachin Pilgaonkar who was her co-star. Both got married in 1985, and later, did many films together. Both Supriya and her husband have participated in popular Dance reality show and have won the award.
Supriya performed in many TV programmes of her husband and also did many Hindi serials and few Bollywood films in character roles. Supriya has also won popular awards for her performance in many Hindi TV serials. Recently, both Supriya and Sachin launched their own daughter, Sriya, through their home production ‘Ekulti Ek.