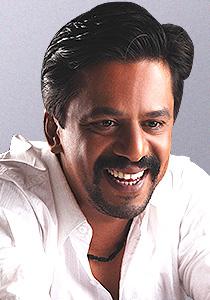 Details : National award winning actor for his outstanding role in the  film ‘Jogwa’, Upendra Limaye got an opportunity to play a variety of roles on stage, television and big screen. Beginning his acting career with experimental plays, followed by television serials and films, Upendra had the privilege of working with renowned Madhur Bhandarkar, Ram Gopal Verma, Amol Palekar, Rajiv Patil, Jabbar Patel, Satish Alekar, Vinay Apte, Waman Kendre, Chandrakant Kulkarni, Anant Mahadevan, Karupaniannan and many others. Besides Marathi, he has also performed in South films.
Upendra’s acting lessons began when he was in school. While in college, along with his friends, Upendra formed a theatre platform ‘Parichay’. And thus, began his acting journey, which took him through films like ‘Bangarwadi’ and ‘Sarkarnama’. Simultaneously, he also performed character roles in Hindi films. It was his role in ‘Jogwa’ that brought him name and fame.