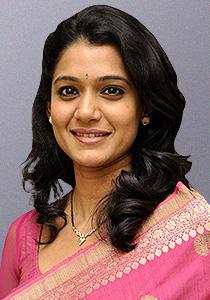 Details : Originally a 'Kathak' dancer, Urmila Kanitkar was part of the ballet that was performed during the Golden Jubilee year celebrations of India’s independence. She has also learnt Odissi from Sujata Mahapatra. Urmila made her acting debut in Marathi films with 'Shubh Mangal Savaadhan' and soon thereafter found roles in films like 'Aai Shappath’ and ‘Saavali’. Urmila was also part of Marathi TV serials  ‘Goshta Eka Lagnachi’ and ‘Vegh’. Urmila was also part of few Hindi serials.

She was lucky to find her entry as replacement to Manasi Salvi in Shubhra’s role in popular Marathi serial ‘Asambhav’ . And, that brought her name and fame, besides winning popular awards in best actress category. Urmila’s best performance was in the Marathi film ‘Mala Aai Vhaychay’ in which, she played a surrogate mother.   Urmila married young upcoming actor Adinath Kothare (Son of Mahesh Kothare) and both of them have worked together in films like ‘Dubhang’ and ‘Anvatt’.