Music of 'Sangharshayatra' released along with film's teaser 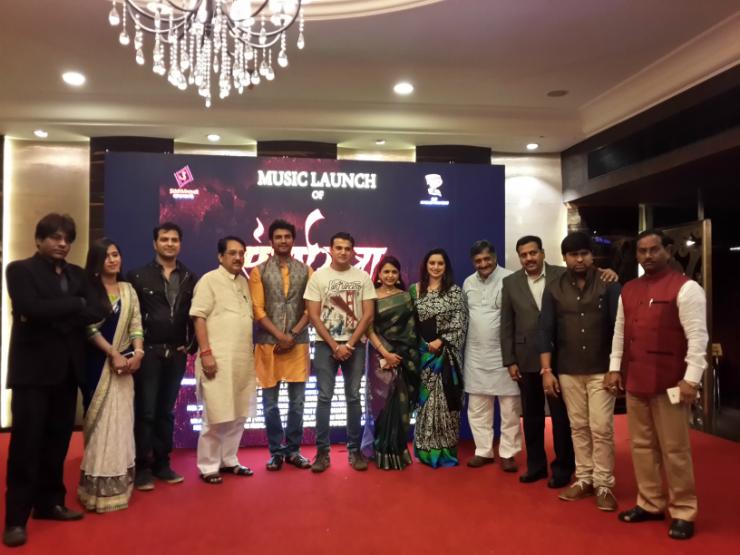 Share this
The much talked about film ‘Sangharshayatra’, which is a biopic on dynamic BJP leader Gopinath Munde, is now all set to release on 11 December, 2015. The announcement was made by the makers of this film on Thursday evening, when the music of this film was released along with the unveiling of the film’s teaser. Produced by Suryakant Baji, Sandeep Ghuge, Mukund Kulkarni and Raju Baji, the film is directed by Sakar Raut.

On this occasion, director Sakar Raut introduced his artistes one by one, stating as to why he opted for them. As we all know, the role of Gopinath Munde is played by Sharad Kelkar; the other performers in this film are: Shruti Marathe as Pankaja Munde, Deepti Bhagwat as his wife Pradnya Munde, Pritam Kagne as his second daughter Pritam Munde, Omkar Karve as Pramod Mahajan and Girish Pardeshi in the role of Praveen Mahajan.

The director specially thanked prosthetic makeup expert Pradeep Premgirikar for changing the look of Sharad Kelkar to resemble Gopinath Munde. “We have deliberately not shown his face in the teaser, as you will all be surprised to see the similarity in the faces of the actor and the late leader, when the first look will be released soon,” said Raut. Music of this film is composed by Shrirang Urhekar and Aniruddha Joshi. Highlight of this film is that Amruta Fadavnis, wife of the Chief Minister of Maharashtra Devendra Fadnavis, will be making her debut as a singer in Marathi films with this film. She also sang her song from this film during this event.

Story, screenplay and dialogues by Viraj Mulye & Vishal Gharge, DOP Sanish Jairaj and editing by Anant Kamat are the other credits.