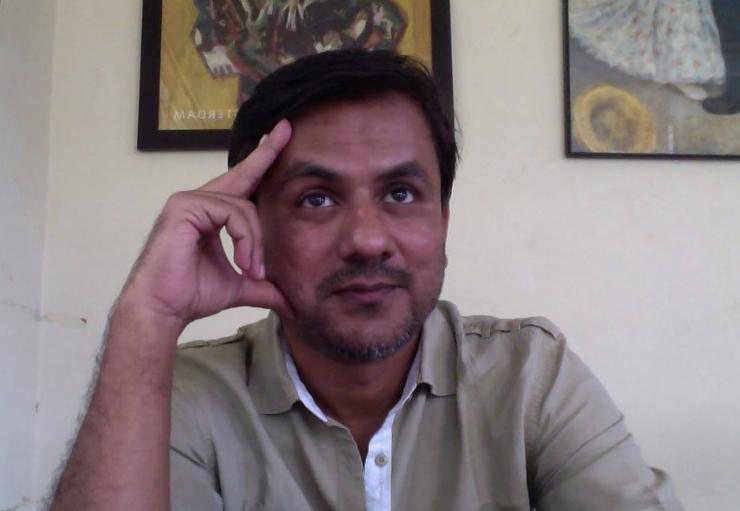 Share this
In Marathi film industry, Girish Kulkarni is known as a multi-talented person. Through films like ‘Valu’, ‘Vihir’ ‘Deool’ and ’Masala’, he not only received critical acclaim as an actor, but also as a writer of these films. Girish not only won a National Award for best acting in ‘Deool’, but also won the National Award for Best Screenplay for the same film. Some of his memorable characters, such as a poor farmer in ‘Valu’, as a postman in ‘Postcard’ and a detective in ‘Pune 52’ are still fresh in our memory.

Being the extremely talented person that he is, Girish has now started his own production company which is now associated with many projects. The forthcoming Friday release, ‘Highway’, is his joint production with his close friend Umesh Kulkarni, who has directed it. Besides writing the script of this film, Girish has also played an important role of a NRI who returns to India, to see his father who is on death bed.

Incidentally, Girish is also making his debut in direction, through Ajay Atul’s forthcoming Marathi film ’Jaoo Dya Na Balasaheb’, which is a comedy film. Zeetalkies met Girish recently, during the special screening of ‘Highway’, where he spoke about his experience as an actor, writer and director.

“I really enjoyed doing this film ‘Highway’. It was a memorable experience as we all had to work as a team. Shooting inside the vehicle was the most challenging job and the perfect co-ordination between the concerned artiste, cameraman and sound recording technician worked wonders,” he said.

Recently, Girish shot his entire film ‘Jaoo Dya Na Balasaheb’ during the first half of this year. “Since this was my debut as a director, I had to face all those problems which arise during the shooting due to natural calamities. “I had planned our outdoor schedule with a specially erected set and everything was ready, when all of a sudden it started raining heavily. It was unseasonal rain. We were not prepared for this eventuality. Anyway, it was a learning experience. Luckily, everything went on well later. Now, the film is at editing stage,” he added.

After his wonderful performance as a Police officer in Anurag Kashyap’s Hindi film ‘Ugly’, Girish has also invited attention from Bollywood filmmakers. When asked about his progress as an actor in Hindi, Girish smiled and said, “Yes, there are few offers which I find interesting. But at present, I don’t want to speak much about them. Now I am focused on my post-production work for ‘Jaoo Dya Na Balasaheb.”

This film is being produced by Ajay-Atul along with with Girish himself. Poonam Shende, Umesh Kulkarni and others are the co-producers. Girish being a writer, producer, actor and director of this film, his work will certainly be watched with a lot of curiosity. So obviously, he has to pay a lot of attention on perfection. We wish him all the best.
Tags: Girish Kulkarni, Highway ek selfie Aarpar