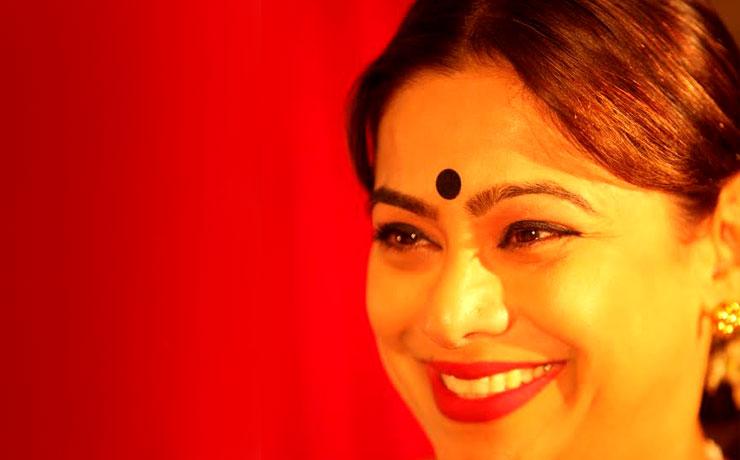 Prior to release of ‘Kaksparsh’, Medha Manjrekar was known more as the wife of film maker-actor Mahesh Manjrekar, though she had performed in a few films. But ‘Kaksparsh’ gave her recognition as an actress. When Mahesh Manjrekar and Nana Patekar announced the making of the film ‘Natasamraat’, based on the popular Marathi drama with the same name, Medha Manjrekar was nowhere in the picture. But later, when Reema Lagoo decided not to play the role of Kaveri, the search was on for a suitable actress for this role.

There was talk that Nana’s wife Neelakanti would play this role; but finally we saw Medha Manjrekar playing this important character. Now, the shooting of this film is over and the film is all set to release on 1 January, 2016. Recently, we met Medha during the first look launch of this film and we asked her whether she was really tense working under the direction of her husband. She quickly reacted, saying, “More than my husband, I was tense performing in presence of Nana Patekar Sir. I had earlier worked under the direction of Mahesh; but I was facing the camera along with Nana Sir for the first time. I can’t tell the exact reason, but I was initially tense to perform in his presence. But as the shooting progressed, I became comfortable and tried my best in the rest of the scenes.”

Medha was highly praised for her performance by Nana Patekar, when he spoke about his experience in this film. But when we asked Medha to react, she said, “I was fortunate to get an opportunity to perform with an actor of his caliber. It was almost like attending an acting school, as he is an institution in himself. Even if I was not part of the scene, I used to watch him perform in other scenes,” she concluded.

After ‘Natasamraat’, Medha will be seen in the film ‘Bandh Nylonche’ along with Mahesh Manjrekar and other popular actors. This film is directed by Jatin Satish Wagle.  This film is scheduled for release on 22 January, 2016.