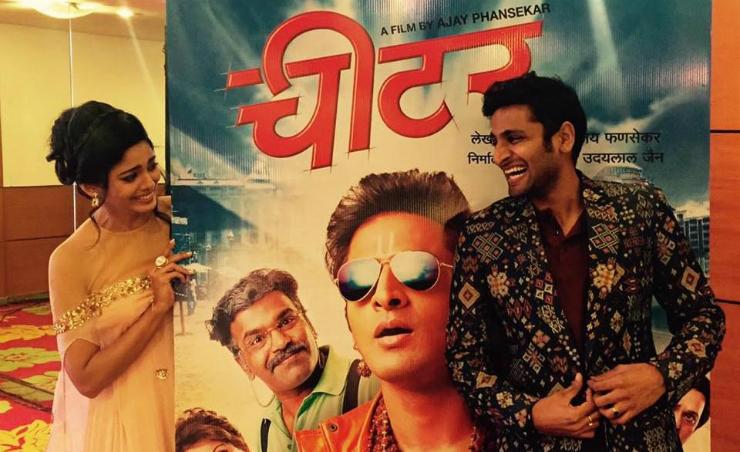 Share this
Actor- director Ajay Phansekar who in the past directed two great Marathi films like Ratra Aarambh and Ek Hotee Vaadi has created a special place in the hearts of Marathi  film lovers. Ajay is now all set to offer his new Marathi film Cheater of a different genre. The film stars Vaibhav Tatwavdi and Pooja Sawant in the lead role and will release all over Maharashtra on May 13, 2016.

Recently, the trailer of the film was launched in a grand way, in presence of its entire team. Speaking on the occasion, Ajay Phansekar said, “80% of this film was shot in picturesque Mauritius. And I received full co-operation from the producers, cast and the crew, while shooting this film.”  He further added, “We had to surmount severe natural hurdles during the shoot of the film and we did it successfully.  Though the genre of this film is different from the previous films I have made, I am sure  the audience will like this  film.”

Made under the banner of Swiss Entertainment Pvt Ltd with producers  Furquan Khan, Pradeep 'Tutu' Sharma, and producer Pravin Kumar, Udaylal Jain, the film stars  Vaibbhav Tatwawdi, Pooja Sawant, Hrishikesh Joshi, Suhas Joshi, Vrushali Chavan &  Jeevan Kalarkar.  DOP B Laxman, Music by  Abhijeet Narvekar, lyrics  Akhil Joshi are the other credits. There are four songs in the film, two sung by Sonu Nigam and Anandi Joshi, and the title track has been sung by Avdhoot Gupte and Urmilla Dhangar has sung a dance song of a folk variety called Jhakri and is one of the main attractions of the film.
Tags: Cheater Marathi Movie, Ajay Phansekar, Vaibhav Tatwavdi, Pooja Sawant