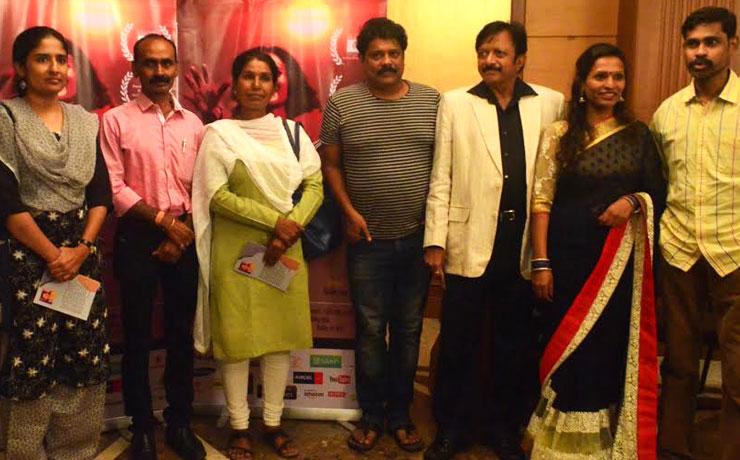 Share this
Produced by Dilip Shah under the banner of D.S. Films and presented by Rishiraj Creations, the forthcoming Marathi film Aart, which is written and directed by Rajendra Sali, exposes the caste panchayat system, which still prevails in some parts of our country. Daily in newspapers, we read about the atrocities on women, who are victims of this system. But, no one has come forward to make a feature film on this subject. But, writer-director Rajendra Sali has dared to make a film on this perceptive issue.

Recently, the first look of this film was launched at the hands of Mukta Dabholkar, daughter of late Narendra Dabholkar and leading activist of ANS, an organization to eradicate superstition in Maharashtra. Present on the occasion were lead artistes of this film, Shital Salunke,Ganesh Yadav, Jairaj Nair, Santosh Mayekar, Ajit Bhagat & Ajit Sawant. The chief guest thanked the makers of this film, for handling this timely subject, which needs to reach maximum people and the administration. Incidentally, the makers of this film will be having a special screening of this film for Lok Sabha members. The film will officially release on May 20, 2016.
Tags: Aart Marathi Movie, Shital Salunke, Ganesh Yadav, Jairaj Nair, Santosh Mayekar, Ajit Bhagat, Narendra Dabholkar, Mukta Dabholkar