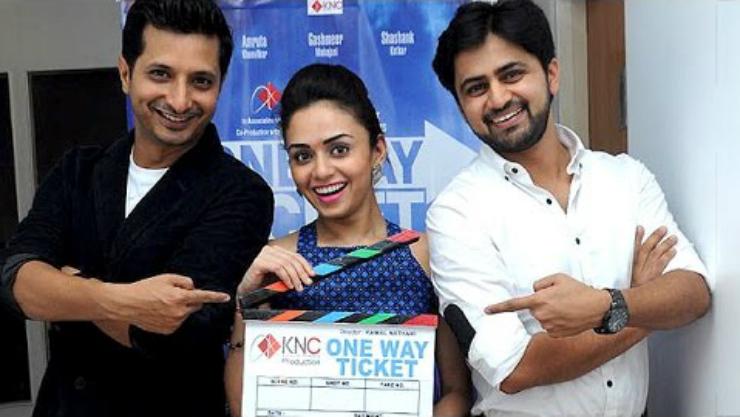 Share this
Producer Komal Unawane, co-producer Suresh Pai and director Amol Shetge had hosted a media meet to launch the first look of their forthcoming Marathi film One Way Ticket on Wednesday evening. Present on the occasion were three lead artistes of the film, Sachit Patil, Amruta Khanvilkar & Gashmir Mahajani. The two other important artistes in this film, Shashank Ketkar and Neha Mahajan could not make it for the function.

The film was launched last September, with Kamal Nathani as the producer and director of the same. But soon, Komal Unawane, along with Suresh Pai and others began to complete this big budget film, shot on a cruise, touring Europe. For a Marathi film, this meant big news. The shooting of this film was completed on Wednesday, followed by the wrap up party and interaction with the media. The first look of the film was really interesting, clearly indicating that it was shot on a grand scale with romance, action, music & thrill.

Speaking on the occasion, director Amol Shetge said, that he worked with a wonderful bunch of youngsters and shooting the film with them was great fun. The three artistes were all praise for the director and especially their producers, Komal Unawane and Suresh Pai, for completing this film successfully.