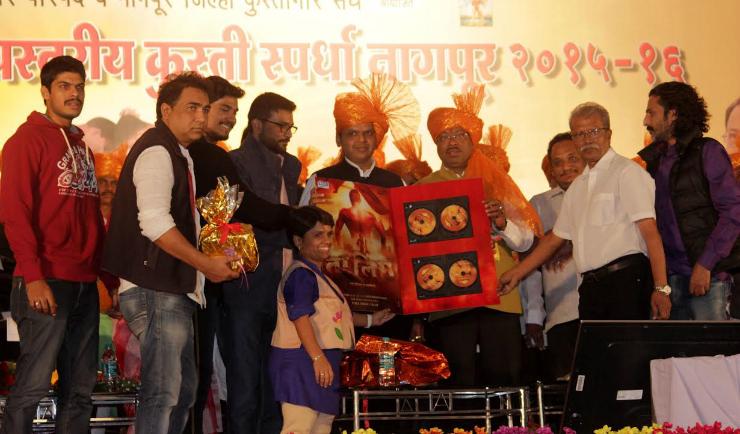 Share this
The 59th Maharashtra Kesari Wrestling Competition concluded recently in Nagpur. But more than the interesting rounds, there was another attraction during this competition. Since forthcoming Marathi film ‘Talim’ is set on the backdrop of the game of wrestling, the makers of this film thought of unveiling the title song of this film with inspiring words like “Talim Rangoo de…” during the course of this competition.

So, the co-producer of this film Mr. Kamal Shah and director Nitin Madhukar Rokade invited dignitaries like the Chief Minister of Maharashtra Mr. Devendra Fadnavis and Minister of Energy Mr. Chandrashekhar Bawankule to Nagpur to unveil this title song, during the course of this competition. Present on the occasion were writer of the film Sibten Shahidi, cameraman Sayed Layak Ali and costume designer-cum-casting director Chaitrali Dongre.  According to the makers, this song will play an important role in the film’s story.

The shooting of this film will begin shortly and the film stars Abhijit Shwetchandra & Prashant Mohite in lead roles.