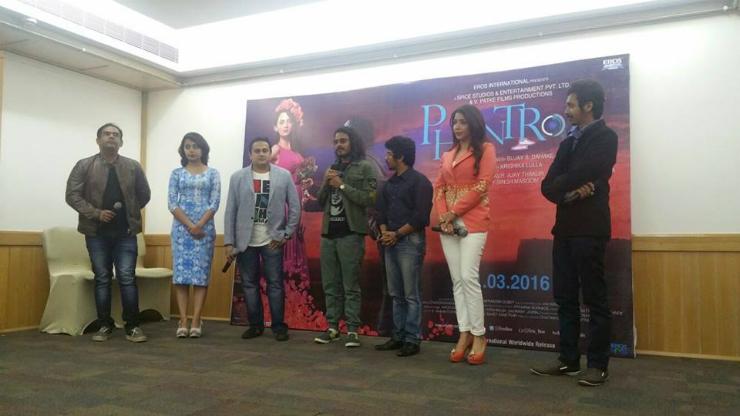 Share this
Forthcoming Marathi film ‘Phuntroo’ is the topic of every discussion not only in the Marathi circles but in Bollywood. The first look of this sci-fi film was unveiled and singer turned actress Ketaki Mategaonkar  all set to give the audience a big surprise, through her different looks.

The grand music launch of Phuntroo was held at the E-Square at Pune. Pune being the hometown of director Sujay Dahake was chosen for the launch. Besides the director, present on the occasion were producer Krishika Lulla, co-producer Ajay Thakur, Sandeep Sushil Sinha, music directors Hrishikesh Datar, Saurav Bhalerao, singers Rishikesh Ranade, Rohit Raut besides the lead artistes Ketaki Mategaonkar and Madan Deodhar and the entire cast and the technical crew of the film.

‘Phuntroo’ is not just a sci-fi film, but is interwoven with a touching love story in the background. Vaibhav Joshi and Mandar Cholkar have written the songs set to music by Hrishikesh Datar, Saurav Bhalerao and Jasraj Joshi. The film boasts of four different songs in various moods. Banni Sethi has designed the costumes while Vinod Sarode has done the makeup. Archana Borhade has cranked the camera while Satyajit Deshpande is the art director of this film.
Tags: Phuntroo Marathi Movie, Sujay Dahake, Ketaki Mategaonkar