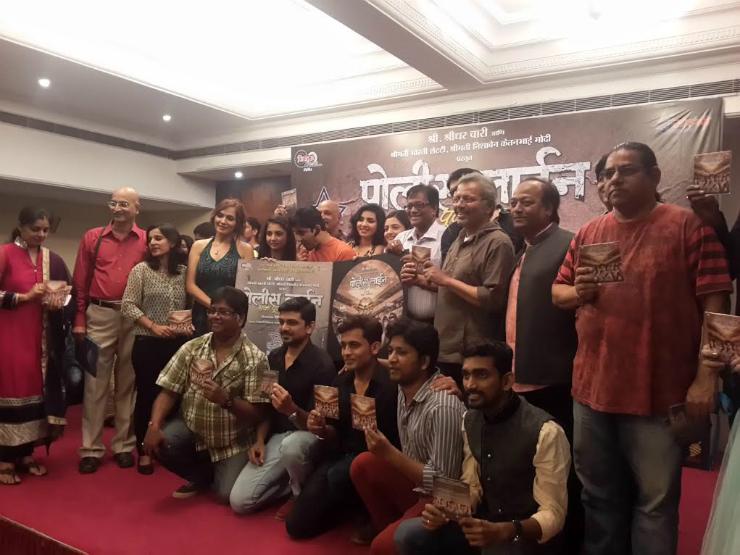 Share this
Known for offering variety through his past Marathi films like ‘Durga Mhantyat Mala’, ‘Gol Gol Dabyatla’, ‘Sat Na Gat’, ‘Teen Baika Fajiti Aika’ and most recently ‘Wanted Baiko No. 1’, director Raju Parsekar will now be presenting the lifestyle and problems faced by Mumbai Police in their day-to-day life. The name of his forthcoming film ‘Police Line’ clearly suggests about the living conditions of Policemen and their family members.

On Wednesday evening, Mr. Prasekar unveiled the first look of his film in presence of a big team of artistes and technicians, numbering around 50. He was more than happy to introduce all of them to the media persons, after the first look of the film was revealed. The music of this film, composed by Pravin Kunwar, was also released on the occasion. There were a few special guests who were invited, and one of them was Prashant Ingole, the lyricist of popular songs of Bollywood film ‘Bajirao Mastani’. In his speech, Prashant not only offered best wishes for this film, but also said that quality of Marathi films was improving day by day.

Among others who spoke about their experience with this film were artistes of this film, Santosh Parulekar, Jaywant Wadkar, Satish Pulekar, Vijay Kadam, Pradeep Kabre, Nisha Parulekar, Nutan Jayant and debutants Sayali Sanjeev & Sharmila Baviskar. Also present on the occasion were other artistes of the film including Pranav Raorane & Swapnil Rajshekhar.

Nilesh Dhamale is the cinematographer of this film, while music is by Praveen Kunvar & Abhishek Shinde. Singers Adarsh Shinde, Bharti Madhvi & Pravin Kunvar have rendered their voices for the songs penned by Koutuk Shirodkar and Nitin Tendulkar (brother of legendary cricketer Sachin Tendulkar). The film is all set to release on 29th January, 2016.