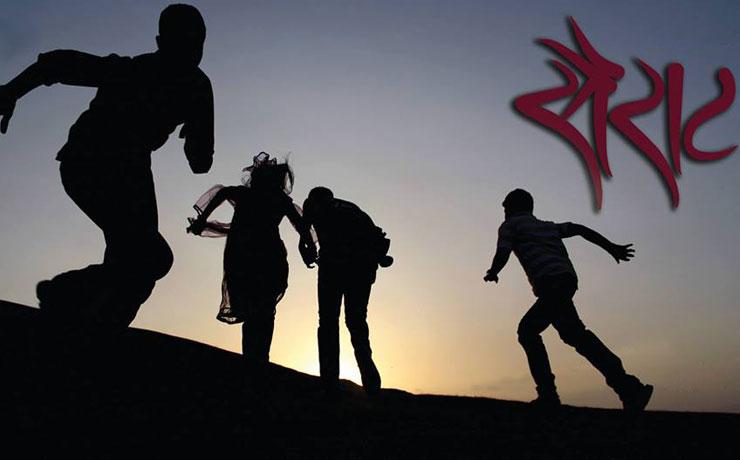 Share this
The first look and music release of a film generally indicate what the film promises to show the audience. The child artiste of the film, Rinku Rajguru, who is now studying in 9th grade, has already achieved a special mention national award for the film, this year. With director of this film Nagraj Manjule and music director Ajay Atul having already won national awards earlier, Sairat is one of the most awaited Marathi films.
On Wednesday evening, Zee Studious organized the music release of the film the in presence of music directors Ajay Atul, singer Chimayi, lead artistes of the film Rinku Rajguru,Akash Thosar, film maker  Mr. Nagraj Manjule and the producers of this film Mr. Nikhil Sane and Mr. Nituin Keni . After Sankarshan Karhade called upon Ajay and Atul on the dais, the popular music director duo, narrated their experience with the director and producers of the film Nitin Keni and Nikhil Sane, during the making of this film.
As Sairat is the first Indian film to record symphonic orchestra at Sony Studios in Hollywood, the video of the actual recording of the music, was shown to the media persons and special invitees. Besides that, the videos of all four songs of the film were also shown, much to the delight of the audience present. Finally, it was the turn of the lead pair to be introduced and when Nagraj Manjule called upon his National award winning actress Rinku Rajguru, she received a standing ovation from the crowd. She was joined by her co-star in the film Akash Thosar. Mr. Nikhi Sane thanked Mr. Nagraj Manjule for making such a wonderful film. He also informed everyone present there, that all the three films of Mr. Nagraj, including his first short film Pistulya had won the best child artistes’ national awards.
One thing is sure that this film promises grand music with well crafted love story. The film is all set to release on April 29, 2016.