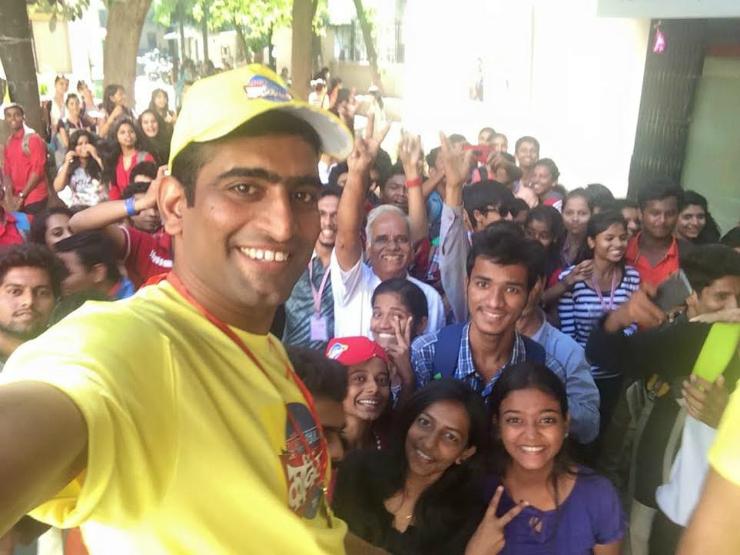 Share this
Be it stage, television or films, Sandeep Pathak is one actor in Marathi cinema who is comfortable with all these three modes of acting. Sandeep, who has spent his childhood in his village Majalgaon, in Beed district of Marathwada, has witnessed the worst drought situations. For him, Water is most precious to him than most.

When we met Sandeep recently, during the success party of ‘Natasamrat’, it all began with the subject of water.  “I had just been to the washroom of this hotel and saw so many decorative taps with sensors fitted. So when you place your hands below the tap, the water starts flowing with full force. This scene took me down memory lane, when my mother used to wait for hours for the water to flow through the tap in our house, sometimes keeping her hands below the tap to check whether water had started flowing drop by drop. Most of the time, we had never used the tap water. The situation hasn’t changed much there, even today. There is no electricity for 8 hours a day. But here in Mumbai, it is a contrasting situation,” he said.

No wonder Sandeep has joined the movement initiated by Nana Patekar and Makarand Anaspure, to help the families of farmers affected by the drought. Only those who have suffered can understand this situation. Therefore, when he has to enact such characters, he is at his best. Sandeep has just 2 or 3 scenes in ‘Natasamrat’, but he has made his presence felt. He was even inducted in this film when casting of all artistes was done. The director had to create a character for him since he wanted him in this film. Sandeep has reached this stage now, that some film makers just want him to grace the screen. Having shot into fame with small roles in films, Sandeep came into limelight with his role of Sopam, in popular TV serial ‘Asambhav’. He has done a variety of roles on Marathi stage too. Sandeep is very popular among the young generation, especially the collegians.

In the recent past, he found a prominent lead role in Marathi film ‘Ek Hazarachi Note’, which won several popular awards for the best film. According to Sandeep, his best is yet to come. “My next film will be ‘Poshter Girl’ and then there is ‘Ranga Patanga’ which has a social message. In this film, I am playing a title role, along with Makarand Anaspure. The subject of this film, being my favorite subject, is based on a social issue with village backdrop. I really enjoyed doing this film,” he concluded.