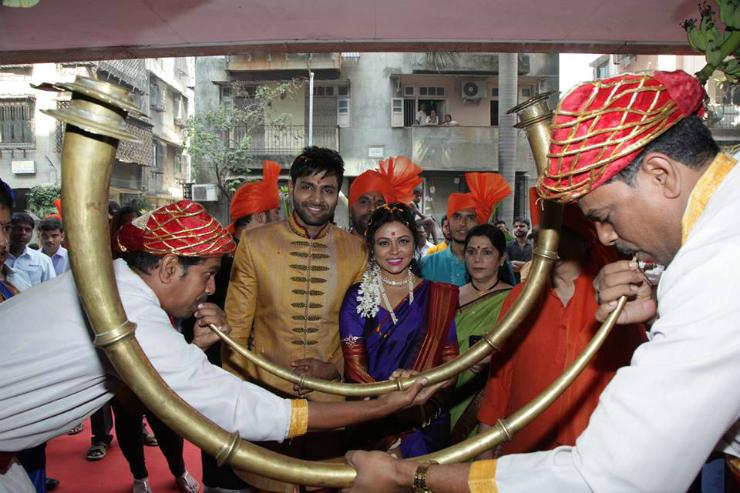 Share this
Now days, film makers have to think differently to promote their films. For the launch of trailer and title song, the makers of ‘Mr. & Mrs. Sadachari’ had created a wedding set-up, to give a look of a special event. Musical instruments used during weddings were used with the performers wearing the traditional dresses. Even the lead pair of the film was dressed up in typical wedding clothes.  The film will be releasing on 19th February 2016, to coincide with the Shivaji Jayanti celebrations.

After the success of their previous film ‘Coffee Aani Barach Kahi’, Vaibhav Tatwavdi and Prarthana Behere will be seen together after almost after one year. Therefore, there are big expectations from this film, which is directed by Ashish Wagh, who is making his debut in direction after being in film distribution business till now. Veteran actor Mohan Joshi is playing Vaibhav’s father in this film, while Uma Sardeshmukh is playing his mother.

Actually, ‘Mr. & Mrs. Sadachari is an action filled romantic film, which is based on father & son relationship. The screenplay and dialogues of this film are written by Pravin Vitthal Tarde & Uma Kulkarni, with the music provided by V. Hari Krishna. Pankaj Padghan makes a contribution in three songs. The film is produced by Ashish Wagh and Utpal Acharya together.