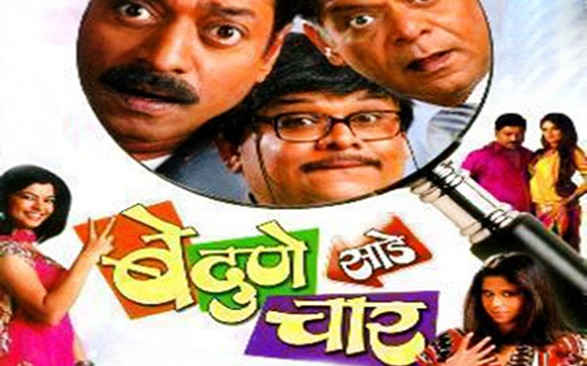 Anant Kiturkar (Mohan Joshi) lives double lives with his two wives, Manorma (Vandana Gupte) and Anjali (Mugdha Shah). Ghodapkar (Atul Parchure) always helps him whenever he is in a fix. Both of Anant’s wives have no idea about each other. Rashmi (Sai Tamhankar) is Manorma’s daughter while Rahul ( Sushant Shelar) is Anjali’s son. Anant’s luck ends on the day when the birthday gifts of Rashmi and Rahul get mixed up. Anant does not want Rahul and Rashmi to meet, so he sends Bandya ( Sanjay Narvekar) as Rahul to meet Rashmi. Bandya falls in love with Rashmi. Anant tries his best to get Bandya out of Rashmi’s life but fails. On the other hand, Rahul is in love with Tanuja (Sneha Wagh) who is the daughter of Mr. Paranjape (Satish Pulekar), Anant’s old enemy. Will Anant’s truth get revealed to Anjali and Manorma?
Genre:
Comedy
Artists:
Mohan Joshi,
Mugdha,
Resham Tipnis,
Sanjay Narvekar,
Satish Pulekar,
Sushant Shelar,
Vandana Gupte,
Atul Parchure,
Sai Tamhankar