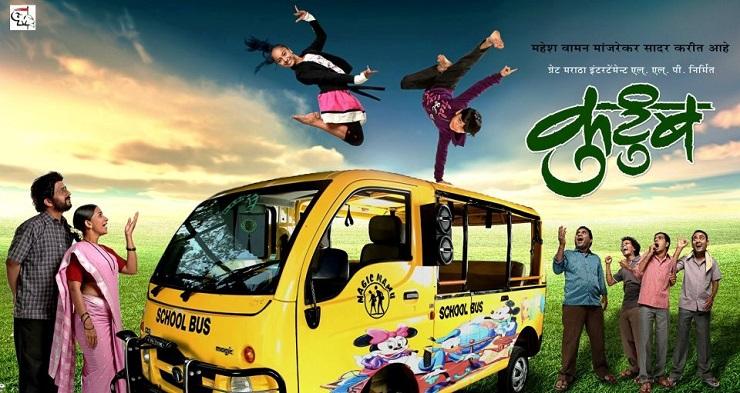 Namdeo and Ganga Solkar (Jitendra Joshi and Veena Jamkar) are happily married husband and wife with two school going children Laxmi (Gauri Engawale) and Subhan (Mihir Soni). Namdeo works as a Gardner in a bungalow in a nearby town and also does odd jobs to meet the demands of his children; be it a Pen drive of PC for his daughter or a Bicycle for his son. He wants to see them happy. But, when the back problem of his wife worsens and she is advised to undergo immediate operation, then comes the real test for him to raise money. Family neighborhood friend and School bus operator Magic Mamu (Siddharth Jadhav) and his wife Saira (Manasi Naik) come to their rescue; but, that's not enough. Namdeo has to borrow additional money from the Moneylender on interest.
Kutumb, Jitendra Joshi, Veena Jamkar
While Ganga is hospitalized, the children live with Magic Mamu and they raise money by performing dance at a local show in a nearby town and win a prize. But, Namdeo does not approve the idea. He beats up his children and insults Magic Mamu for encouraging his children into such an act, which relates to his past life. When Namdeo himself has to undergo a major operation, the children have no other option, but to take part in a dance reality show, with the help of Mamu Magic and his wife, to win a big cash award.
Genre:
Family
Artists:
Jitendra Joshi,
Gauri Ingwale,
Veena Janmkar,
Mihir Soni,
Siddharth Jadhav,
Manasi Naik,
Vaibhav Mangale,
Bhalchandra Kadam,
Prabhakar More,
Sandeep Redkar,
Sagar Karande,
Shreeram Pendse,
Ravi Sangwai