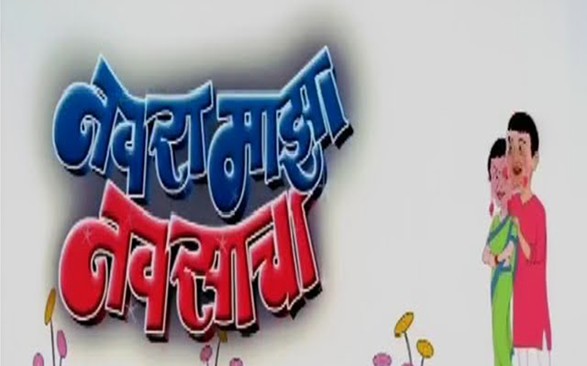 Vakratund (Sachin Pilgaonkar) and Bhakti (Supriya Pilgaonkar) is a married couple. They have married against Bhakti's parents wish. Vacky as he is known as is an artist but does not have commercial success. Even after 10 years of marriage the couple is not blessed with children.
Bhakti gets to know from Vacky's aunt (Nirmiti Sawant) that Vacky was born by a vow taken by his father. Vacky's father had vowed to God that if his child is born healthy he will bring his child to Ganapati Pule naked. This vow is left unfulfilled as Vacky's parents pass away.
Bhakti tries to persuade Vacky to go to Ganpati Pule naked. But, he does not agree to it. As suggested by a friend, Vacky confronts a sage. Who advises to take a mannequin dressed as Vacky secretly in a public transport to Ganapti Pule to fulfill the vow. Vacky and his friend Kishore manage to sneak in the mannequin in a state transport bus the previous night of the travel to Ganapati Pule.
The remaining story has the highs and the lows that the couple face while travelling in the bus from Mumbai to Ganapati Pule. The situations and characters generate humor.
Finally, Vacky manages to fulfill the vow at Ganapati Pule.
Genre:
Comedy
Artists:
Sachin Pilgaonkar,
Supriya Pilgaonkar,
Ashok Saraf,
Vijay Patkar,
Ali Asghar,
Reema Lagoo,
Sonu Nigam,
Vijay Patwardhan,
Kuldip Pawar,
Nirmiti Sawant,
Kishori Shahane,
Satish Tare,
Sunil Tawde