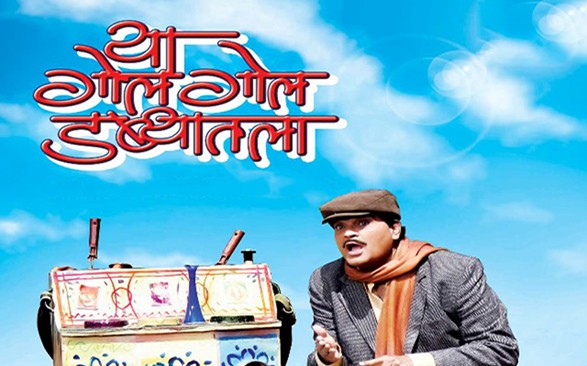 ‘Ya Gol Gol Dabyatla’ is an emotional story of the aged parents who are abandoned by their own son.
Bhajaba Mahipati (Ashok Saraf) and his wife Lakshmi (Smita Talwalkar) become parents of a baby boy after 12 years of their marriage and name him Digambar. They are very happy after Digambar’s birth. Bhajaba does the job of entertaining the villagers through a bioscope and earns his livelihood.  Bhajaba and Lakshmi strive hard to educate Digambar. Little do they know that their son is drifting away from them because of this move! Digambar feels embarrassed by his father’s profession and starts staying aloof. Digambar (Santosh Juvekar) does well in studies as well as other curricular activities like dance and drama and grows up to be a brilliant student. One fine day, Digambar decides to leave the village and go to Mumbai for higher studies. Bhajaba puts in all his savings for Digambar’s higher education. Digambar cuts all ties with his parents and becomes an actor in Mumbai. Digambar even changes his name and is known by the name of Anand. He gets married to a girl named Sarika (Smita Shewale) who is the daughter of a well known producer. Digambar doesn’t even inform his parents about his marriage. Bhajaba and Lakshmi plan to get Digambar married to his childhood friend and neighbor Janhvi. They come to Mumbai to meet him but are shocked to learn about his marriage to Sarika. Digambar doesn’t tell Sarika that Bhajaba and Lakshmi are his parents and they are treated like servants. Bhajaba and Lakshmi are pained because of this humiliation and leave from there. Lakshmi falls severely ill and Bhajaba is asked to arrange rupees 2 lacs for her treatment. Bhajaba decides to teach Digambar a lesson and drags him to the court. Bhajaba fights for his rights and makes Digambar realize the worth of his parents.  Will Digambar realize his mistake? Will Bhajaba and Lakshmi be able to forgive him?
Genre:
Drama
Artists:
Madhav Abhyankar,
Santosh Juvekar,
Smita Shewale,
Smita Talwalkar,
Vijay Chauhan,
Ashok Saraf