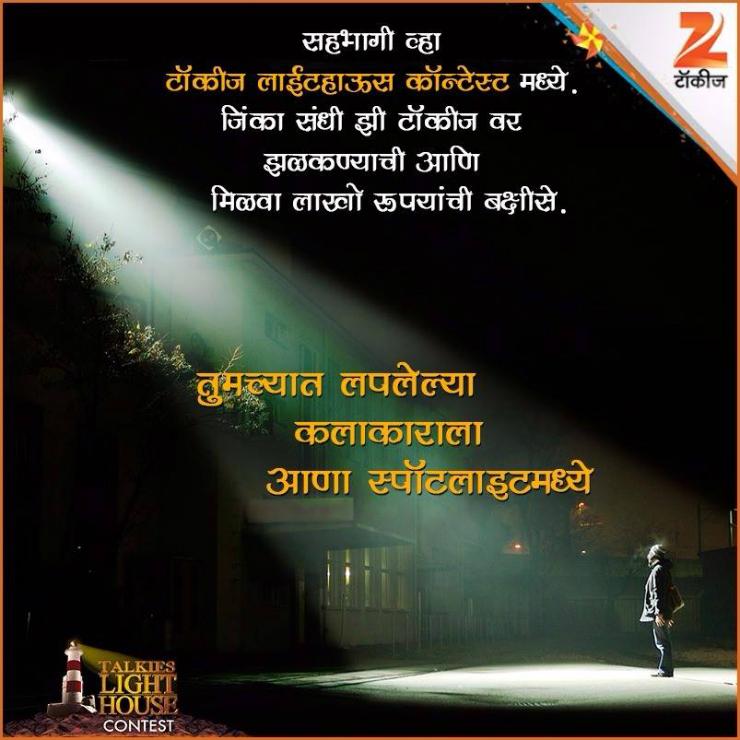 Share this
Zee Talkies is giving upcoming talent a boost through the Talkies Lighthouse contest. Talkies Lighthouse is a one-of-its-kind series that showcased short films on the Marathi channel every weekend from January 10, 2016. The show, a success has now opened its doors for the young gifted film-makers and film enthusiasts. The contest began on 24th February, 2016 and will continue till the 27th March 2016 with entries from across India in different languages. The contest will have an Open as well as a professional category for participants and the theme for the short film is Stories in Maharashtra; it could be a day, a love story or an adventurous trip.

Speaking about Talkies Lighthouse contest, Bavesh Janavlekar, Business Head, Zee Talkies, “We are extremely happy with the response received to the series. The main aim behind starting an initiative like Talkies Lighthouse was to generate buzz about short films and garner recognition for budding filmmakers. So far we have received a positive response and we are looking forward to more entries from across the country.”

Participants are invited to shoot a story using a phone or camera, according to the theme and share it with the Zee Talkies team on www.zeetalkies.com/lighthouse or can even send in videos on a special Zee Talkies’ Whatsapp number, 9619081366. Alternatively, participants can also send in their videos to Response Team,  Zee Talkies, 16th Floor, Zee Entertainment Ltd, Marathon Futurex Building, N.M Joshi Marg. Lower Parel, Mumbai 400013. The jury will then select the best of the lot to be featured on the channel as part of the series. Also, winners stand a chance to win cash prizes worth lakhs.

With a celebrated jury and prominent names, the contest is a huge platform for all those who are eager to showcase their talent.
Tags: Talkies Light House Contest, Short Film Contest, Bavesh Janavlekar, Zee Talkies, Lalit Prabhakar, Neha Mahajan