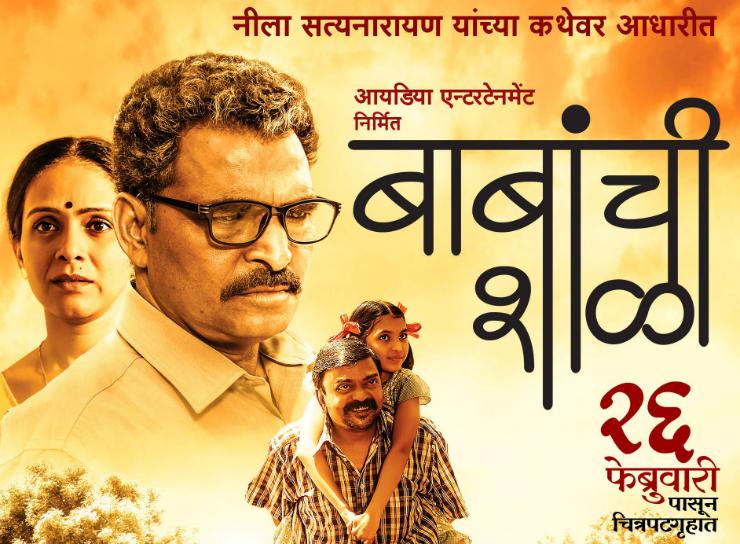 Name of the film: Babanchi Shala

A good script is the essence of any film. But, besides that its presentation in the screenplay also needs a special skill. This has been proved in Idea Entertainment’s latest release, ‘Babanchi Shala’ written by Neela Satyanarayan and directed by R.Viraj. This film is loosely based on V.Shantaram’s film ‘Do Ankhen Barah Haath’ made 60 years ago.

Mahipat Ghorpade (Shashank Shende) loses his temper and  commits a serious crime. The court convicts him and sentences him to life imprisonment. Mahipat's jail term affect his family especially his younger daughter, Sonali (Gauri Deshpande) as they are at the receiving end of taunts from others. Jailor Shrikant Jamdade (Sayaji Shinde) and social worker Neeta Satam (Chaya Kadam), who come to know about this situation try to help Sonali and other such family members of other prisoners in the jail. And, what transpires through their efforts, is the realistic tale of this film. The producer and director of this film, deserve all the praise, for handling such a touching subject.

Such a subject invites the attention of a common man towards this social issue. Sayaji Shinde and Shashank Shende have played their respective roles with absolute sincerity. Aishwarya Narkar who plays the wife of the jailer in this film has done a good job. In this film. Good performances also come from Kamlesh Sawant, Chaya Kadam, Aarti More, Kartik Chavan, Umesh Bolke, Milind Adhikari & Gauri Deshpande. In the film, there are two meaningful songs, penned by Shrirang Godbole & Neela Satyanarayan on the music  Sohan Pathak & Neela Satyanarayan. ‘Babanchi Shala’ based on an important  social issue, is a must watch film, produced by Umesh Nathani & Vilas Mane.