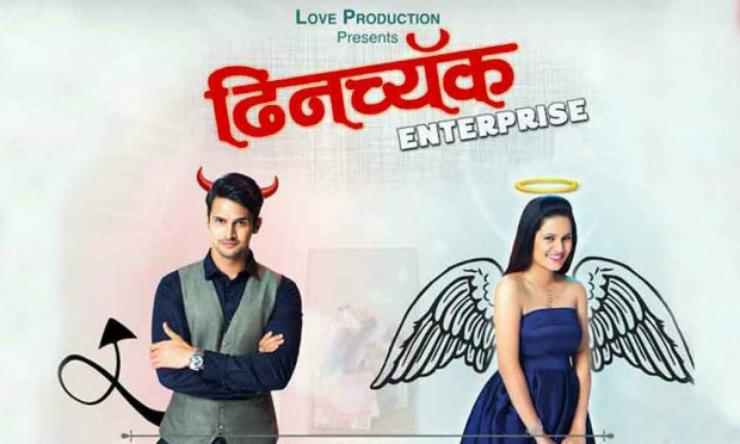 While dealing with a social issue, a film must also be entertaining. Debutant director Nishant Sapkale’s film ‘Dhinchak Enterprise’ does just that. Offering light humour in the first half while in the second half he has offered lots of surprises keeping the audience interested. The ending is different which adds to the effect of the film.

Vishal Patil( Bhushan Pradhan) and Meera Tandel(Manva Naik) with the help of their friend start a company to help the NGO’s but lands up making a profit instead. A meeting with a prospective client (Resham Tipnis) Vishal comes to know that his company is collecting money for a child who is already dead. He is shaken by this and feels guilty. He then goes on to investigate the facts about other children and the concerned NGO and discovers some shocking facts. In the process he even forgets his love Meera and the promise he made of getting married to her.

The main plot of the film evolves in the second half, exposing the corrupt practices that are carried out in the name of social work. Actor Bhooshan Pradhan has very cleverly depicted a confused youth who realizes that he is a pawn in the process of the NGO making money. Good support comes from Manva Naik while helping him to start his business. Khursheed Lawyer is entertaining through the character of their common friend.

There are many other artistes like Ashwini Ekbote, Resham Tipnis Jayant Savarkar, Saksham Kulkarni, Jaywant Wadkar, Anant Jog who have cameos in this film. Cinematographer Udaysingh Mohite and Editor Deven Murudeshwar have done excellent work. The background score by Madhav Vijayis is very appealing. Dhinchak Enterprise is entertaining, at the same time thought provoking.