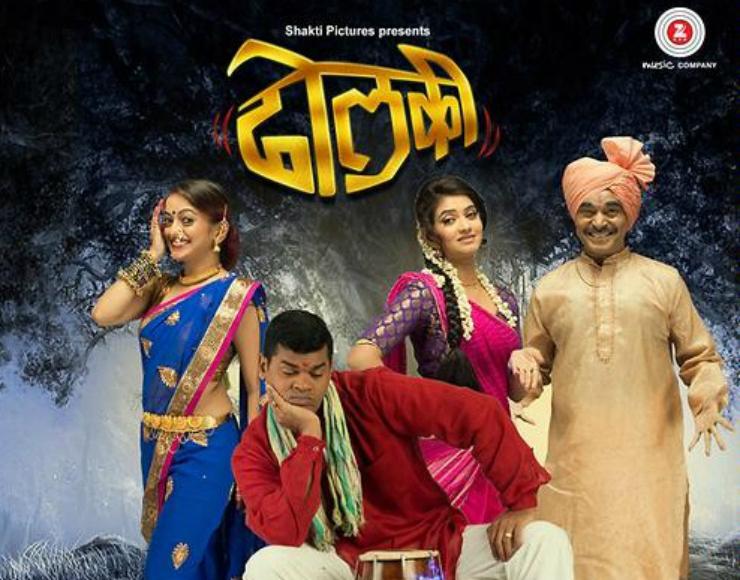 Share this
There was a time when we saw a lot of importance given to ‘Dholki’ ( A member of the drum family) in Tamasha-based films like ‘Sangato Aika’, ’Ek gaon Bara Bhangadi’, ’Kela Ishara Jata Jataa’, ‘Pinjara’ and ‘Sugandhi Katta’. Shakti Pictures have now presented a Marathi film based on the same instrument, directed by Raju and Vishal Desai. Filled with songs and dances, the film goes from focusing on traditions to a ghost story in the second part of the film.

The film revolves around a drowsy youth Lala (Siddharth Jadhav), who spends most of the time sleeping, much to the disappointment of his mother (Jyoti Chandekar). The happy-go-lucky Lala flirts with the Village Head’s (Sayaji Shinde) daughter (Kashmira Kulkarni).  One day, when Lala is searching for his education certificate on the loft, he finds a Dholki and it brings a change in him. Lala gets excited with the noise of the drum and whenever he taps any object, he hears the beats of a drum. Lala soon becomes becomes an expert drummer.

Lala then comes across a Lavani dancer (Manasi Naik) and eighteen other strangers. Lala insists on joining their group, but his mother is against it. She has a specific reason to oppose him, which is revealed later in the film.

The highlights of the film are the dance performances by Manasi Naik and Kashmira Kulkarni. While Manasi steals the show with her dance skills, Kashmira looks pretty and has also danced well. Siddharth has worked very hard on his character. Jyoti Chandekar has played his ‘Aaye’ effortlessly. There are many other artistes in the supporting cast, in small and limited roles. Technically, ‘Dholki’ is a well-made film; but it has failed to appeal to the viewer beyond a certain point.

The director duo of this film, Raju and Vishal Desai were popular child artistes of yesteryears and have worked with many well-known artistes like Amitabh Bachchan and others. It is commendable that they decided to make a Marathi film, but beyond this, there is nothing substantial in the film which would warrant further praise.

Why you should watch the film: Manasi Naik and Kashmira Kulkarni show that they are more than just pretty faces, with their performances. Siddharth Jadhav has done well with his role too. The film has a nice aesthetic appeal to it as well.