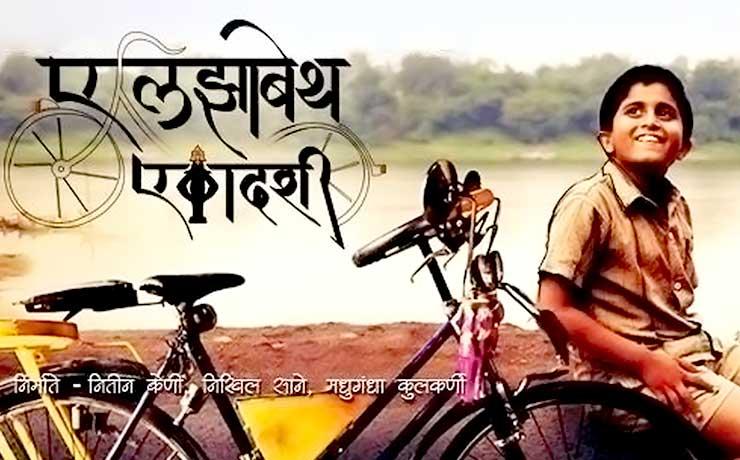 Share this
Denis Waitley once said, “The greatest gifts you can give your children are the roots of responsibility and the wings of independence.” Life for children is not the same, as we visualize in our city life. It is full of hardship and struggle; particularly, if they are living in small towns and district places. Just imagine what would happen
to these children if they lose their father during their growing age? Film maker Paresh Mokashi who made his debut through award winning film ‘Harishchandrachi Factory’ almost five years ago; now returns with another sensible film ‘Elizabeth Ekadashi’, which is set on the backdrop of Pandharpur, a holy town in Maharashtra.

The film begins with a situation, where a young widow (Nandita Dhuri), mother of two little children Dnyanesh 10 yrs  ( Shreeranga Mahajan) and 8 year old Mukta (Saili Bhandarkavthekar) is busy making woolen wears on a machine, purchased on installment basis  through a bank. With great difficulty, she manages the house, which also has her old mother in law. As the Ekadashi festival nears, the mother faces financial crisis. Not having paid the installments, the bank people take away the machine; asking her to pay at least Rs.5000/- to get it released.

The woman is in a big dilemma, as she has to raise the funds and plans to sell some of the household items. She also decides to take up festival work of preparing sweets at a community service centre to earn good money. To arrange the remaining amount, she decides to sell the well equipped bicycle named Elizabeth, manufactured by her late husband for a good price. However, when the children come to know about her plans, they are all out to save Elizabeth. How they plan their methods of raising finance, without the knowledge of their mother and with the help of their other little friends, turns out to be an interesting story.

Director Paresh Mokashi seems to have been influenced by Iranian film director Majid Majidi, while making this film. At least some of the scenes certainly have the influence of the Iranian director's film, ‘Children of Heaven’ which also has the story of little brother and sister, almost of the same age group. However, through this film, Paresh has highlighted the living conditions of the holy township in Maharashtra; which makes the film more appealing. Through this film, he has tried to emphasize how collective thinking among the children can make anything possible. He has also used the references to Newton’s law of Universal Gravity and Einstein’s theory of General Relativity very well, keeping an eye on the universal audience.

Crispy dialogues, especially use of typical local colloquial language of that place, has made the film more appealing. But, above all, the wonderful performances by all the children, namely  Shriranga, Saili, Pushkar are to be highly appreciated. Pushkar, in particular, who plays the naughty but helpful Ganya, shows a lot of promise. In the role of a helpless mother of two children, Nandita Dhuri is very impressive. She has clearly shown her frustration in many emotion filled scenes in the screenplay.

Music by late Anand Modak is most appropriate, considering the backdrop of this film. The background music in particular, including one song repeated according to the situation, has been used well. Writer Madhugandha Kulkarni and director Paresh Mokashi have together made every scene of this(about 90 minute long) film, very interesting. A must see film by all the parents along with their children. Incidentally, this film’s release is coinciding with the upcoming children’s day. Produced by EsselVision and Mayasabha together, the film has already generated a lot of interest during its promotion.