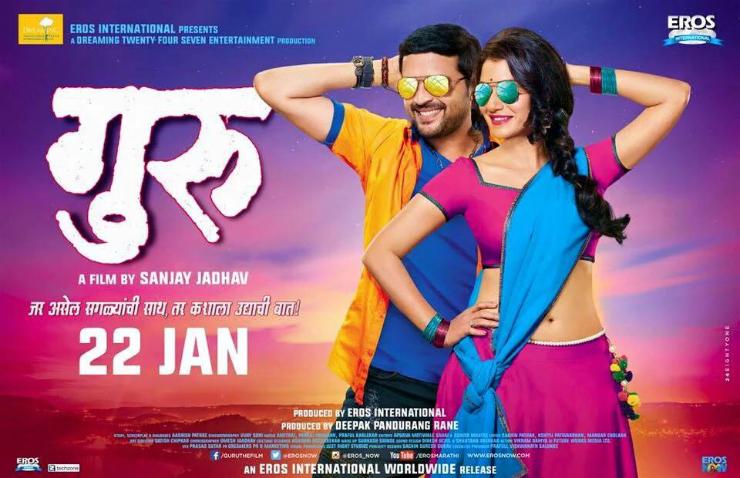 The first look of any film gives us an idea about the type of the film. Therefore the audience comes to know what the film is going to offer and if the film is able to fulfill the expectations, they feel satisfied. Eros International’s film Guru falls in this category. The film has all the relevant content to be considered as a complete entertainment package.

Guru, played by Ankush Choudhari, is a petty thief who resides in one of Mumbai’s slums. He realizes that the police is searching for him. In one of the cases, he runs away to reach his brother’s (Avinash Narkar) place and joins his small family. Here, he comes to know about the evil plan of local MLA Mansingh, who is harassing the villagers to sell their lands to Government for the construction of a Mega City with the help of a big builder (Ravindra Mankani) in Mumbai. When Mansingh targets Guru’s brother for opposing his plans, Guru dares to challenge him in his own style. On one side, we see him fighting Mansigh and his people; on the other side, we see his love story happening with a smart and fearless village girl Ovi, whom he calls Mango Dolly.

The film is filled with entertainment, entertainment and only entertainment. The film begins well and keeping with the required pace, shows some dramatic happenings but in the second half it slows down a bit, with predictable happenings. Good dialogues supported by good music and dances are the USP of this film. Urmila’s character has been very colorful and she has lived up to the expectations of the film maker, making it more presentable. Murli Sharma, who plays the villain in this film, invites all the attention with his superb body language and style of delivering the dialogues.

The film will be a delight for the action film lovers and we hope it does well at the box office.