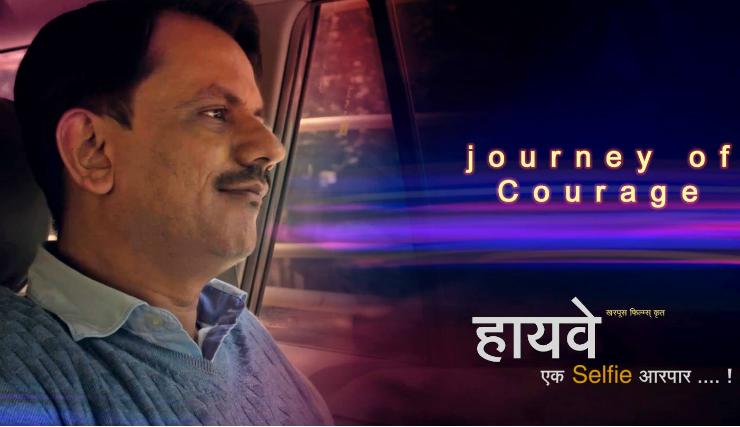 Share this
Road-based-movies have become a genre by themselves in Indian film making. A few examples of such movies made in the past are ‘Sadhu Aur Shaitan’,’ Bombay to Goa’ and ‘Road’. In Marathi, Sachin Pilgaonkar attempted one such movie ‘Navara Majha Navsacha’, which was inspired by ‘Bombay To Goa’. Two years ago, we saw a Hindi film ‘Highway’, which was also a good road movie.

Now producer Vinay Waman Ganu has presented this latest Marathi film ‘Highway- Ek Selfie Aar Paar’. Made under the banner of Aarbhaat Creation and Kharpus films, this film is directed by Umesh Kulkarni.

Now looking at the title of this film and the way the film’s promotion was done, it was very clear that the audience had to imagine this journey with different characters of this film. So the journey of these characters begins from Mumbai, heading towards Pune. But in the post-interval session, we find their journey has come to a grinding halt thanks to a heavy traffic jam caused by a major accident somewhere at Khandala Ghats.

In the first half, we notice distinct characters beginning their journey from Mumbai for different reasons. Among them is an actress (Huma Qureshi) who is on her way to an event, escorted by a representative of the organizers (Shrikant Yadav). Then we have an NRI, who has just arrived in Mumbai from USA, who has hired an air conditioned private taxi. On the way though, he offers a lift to a couple (Vidyadhar Joshi and Renuka Shahane) who has met with an accident.

Then we see a Lavani performer (Mukta Barve), who hires a shared taxi to travel with her mother. She is constantly seen troubling the passenger seated next to her. There is also a desolate man (Kishor Chaugule), who is travelling in the same taxi, and is seated next to the driver, holding a cage of lovebirds. There is a married couple (Sunil Barve and Vrushali Kulkarni) travelling in their own car. There is also a lady (Tisca Chopra) from a rich family, who is travelling with a youngster. All the characters have a purpose for undertaking the trip, and the audience gets to understand their personal problems along the journey.

Writer Girish Kulkarni, cinematographer Sudhakar Reddy and editor Paresh Kamdar have shouldered the responsibility of undertaking this road journey. The screenplay though, certainly has a few speed breakers. They should have taken more efforts to make it more presentable. There is one song in the film written by Vaibhav Joshi, with the music provided by Amit Trivedi.

There is nothing new in attempting a film on this subject. There were expectations for such a film to be made more interesting with gripping, realistic incidents. The artistes of this film have tried to generate that interest with their sincere performances, but the audience is left wondering whether so many characters were required in the first place.