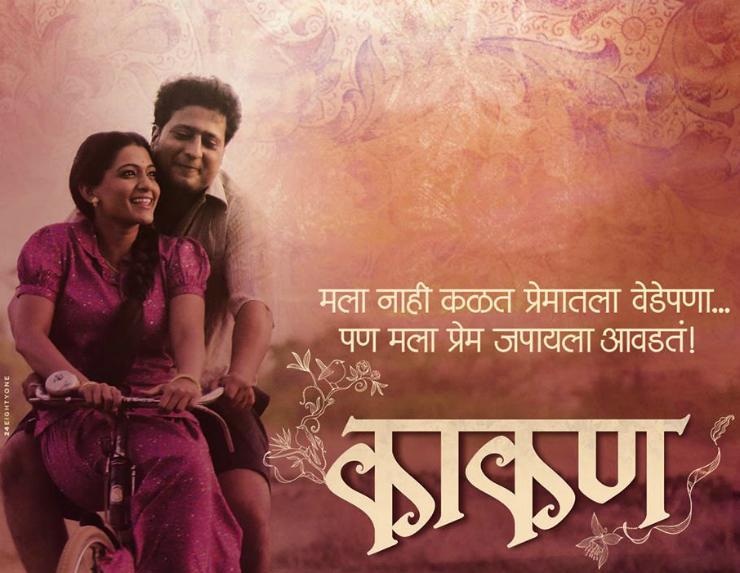 Share this
‘Kaakan’ has proved that Kranti Redkar is not only a glamorous and versatile actress, but a talented film director and story writer too. Apart from direction, Kranti has also written the screenplay, dialogues and lyrics of film, besides shouldering the responsibility of film’s choreography. The result has been an intense love story, set in the picturesque Konkan.

The highlight of this film is the wonderful performance by Urmila Kanitkar Kothare, with good support coming from the child artiste, Ashutosh Parshuram Gaikwad. Lyrics and good music are the other plus points of this film. The only setback is the slow moving screenplay, with some scenes stretching a bit. However, the film scores because of excellent cinematography by Bithin Das, who has captured the mesmerizing beauty of Konkan in this film.

Gopi (Ashutosh) and his friends find an old and depressed man named Kishu (Jitendra Joshi) on the seashore of the village. Gopi is intrigued by Kishu and develops an affinity towards him. He, then tries to find out the reason for his depression and soon comes to know that when Kishu was young, his girl friend Sudhamati (Urmila Kanitkar Kothare), married another man (Ashok Shinde) and got settled in Mumbai. To make Kishu happy, Gopi leaves for Mumba, in search of Sudhamati.

During his search for Sudhamati, he becomes friendly with Wasim (Aakash Banerjee), who works at a tea stall and helps him to survive for few days in Mumbai. Finally, Gopi succeeds in his mission. This is what the journey of ‘Kaakan’ is about. Kranti Redkar has shown her skills as a director, by making an effort to make the story interesting through some important scenes. She using the shift to flashback mode well. In the process, she has gone into more detailing, in the screenplay. In addition, this is where; she has proved that she can be considered among the few female directors, who know their job well.

Urmila Kanitkar Kothare displays her deep involvement in the character of Sudhamati. She has portrayed this character of a girl from Konkan, with perfect Malvani accent and body language. This should be a lifetime role in her acting career. Wonder child star Ashutosh Gaikwad has given his best, throughout the film. It is his character, which takes us along with him, to witness this intense love story. Two songs in this film are very well composed. Thanks to Omkar Mangesh Dutt and Kranti Redkar for meaningful lyrics and music director Ajay Sinha, for making sure the songs have the right impact on film’s screenplay. Though it has a traditional touch of intense love story, still ‘Kaakan’ is worth watching.