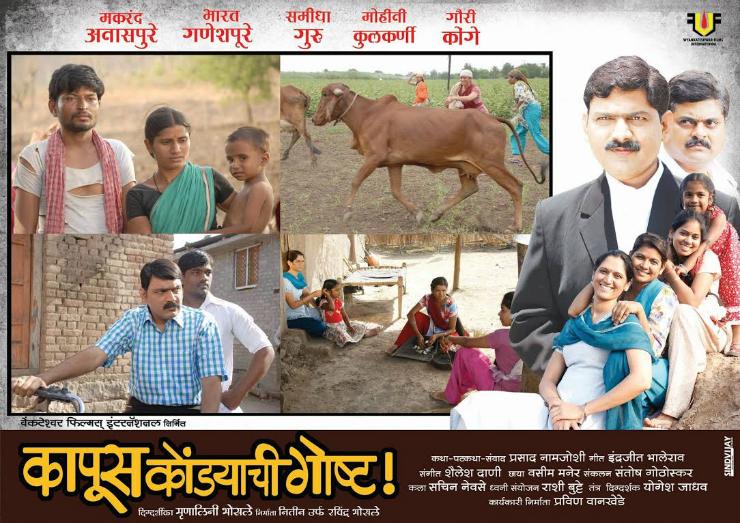 Certain Marathi films in the past have brought up the issue of farmer suicides over drought affected regions including the Vidarbha region of Maharashtra. And making of such films is of utmost importance to make people aware about theissue. Latest released Marathi film Kapus Kondyachi Goshta, directed by Mrunalini Bhosle takes us closer to one such realistic situation.

The story revolves around a farmer who has four daughters and ends up committing suicide, due to drought in the village whose wife is murdered too. In this situation, the four daughters face a very tough time. The eldest daughter works with a lawyer. The eldest daughter works with a lawyer whose wife doubts him of cheating on her with the daughter but the lawyer, understanding this situation, tries to help this farmer’s daughter. The second daughter of the farmer is cheated by the son of village head, with the false promise of marriage. The lawyer comes to the rescue of this girl and even suggests her the method to teach a lesson to street side eve teasers.

The film’s story is based on a real story, which happened in Pusad village in Yavatmal district. The film has succeeded in presenting this emotion filled story of the four daughters of the deceased farmer.  Sameedha Guru has played the strong character of the eldest daughter, shouldering the responsibility.  Makarand Anaspure has played the lawyer, while Bharat Ganeshpure has played the villain, very well.

Director Mrunalili Bhosle and her husband have been doing selfless service in real life to attend to the problems faced by farmers. And, they thought of making this film. It is for this reason that the director could present this subject effectively. The film will surely offer a different experience to the audience.