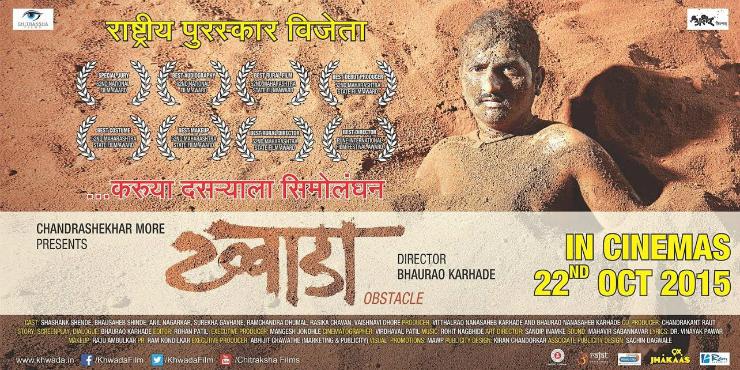 Name of the film: ‘Khwada’

Today, we find Marathi films being made on different subjects but very few are ‘new wave’ films which are able to create an impact on the audience. Latest film ‘Khwada’, which has already won two National awards, belongs to this category. The film has also won five state awards in different categories and hence had a lot of expectations from the audience to contend with.

The film revolves around a shepherd family which is fighting their battle in court for the past 10 years, over their land acquired by Forest department. The family comprises of Raghu, the head of the family, his wife, elder son Panda and his wife, younger son Balu and the grandchildren. The family moves from place to place along with their herd of sheep to feed them. The film talks about the harsh problems and hurdles faced by the family as well as the ones by its individual entities. Then, there is a village administrator who exploits them. It is at this stage we find a sudden change in the attitude of the youngest son, Balu. What he does, takes the story forward to its memorable conclusion.

Almost all the characters are so natural that you feel as if they are real life shepherds. Therefore the audience feels compelled to attach themselves to the characters and empathize. In the role of Raghu, Shashank Shende, the only recognized actor from Marathi film industry, has given a wonderful performance. In the role of Balu, Bhau has portrayed his role with complete understanding of his character. He even looks the part as a well-built youngster. Anil Nagarkar is also impressive as the villain in this film. Good support comes from Yogesh Dimble, Rasika Chavan, Vaishali Kendale, Chandrakant Dhumal, Vaishnavi Dhore and many other new faces. The film has been shot on the Pune- Solapur belt, showing the drought-affected areas and thus giving a true picture of the state and the ignorance on the part of the administration. The film has a very different viewpoint and hence appeals to the audience.

Actually, the lifestyle of the shepherds is very slow and the film too moves with that speed on many occasions. But it remains to be seen whether our regular film audience would accept this sluggish pace. The film had won the National and state awards sometime during April – May this year. But, it has been released almost after six months and that too without much publicity. Therefore, this should not come in the way of film’s success at the ticket windows. However, this film is a must watch film for its different approach.