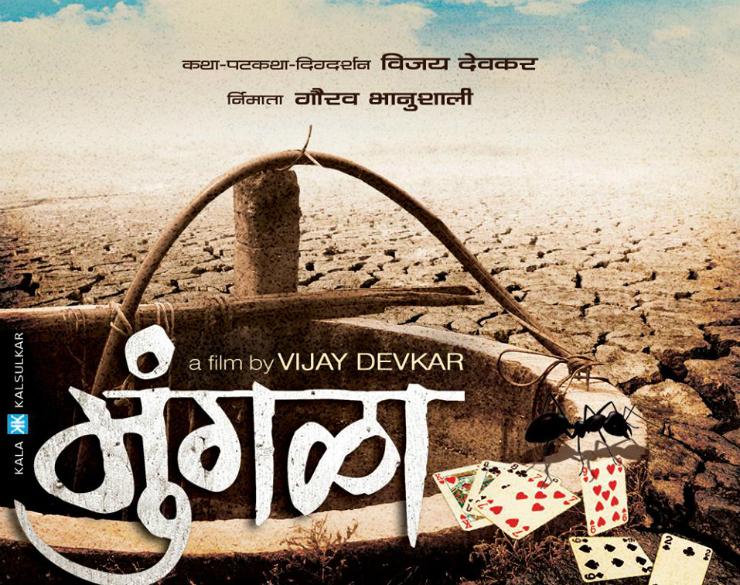 
Films with rural backdrop have become somewhat of a novelty in Marathi films. In the last few years, we also saw some films in Marathi set on the drought faced by rural areas in Maharashtra. Films like ‘Goshta Chhoti Dongaraevadhi’, ’Gabhricha Paus’, ‘Zing Chick Zing’ are a few such films. Some of these films also won awards at film festivals. Now, producer Gaurav Bhanushali and director Vijay Deokar have brought a film ‘ Mungla’, which is also written on a village facing a drought.

The film has tried to present the drought situation along with the problem of unemployment. Instead of doing a job on a low salary in the city, Kisan (Lokesh Gupte) prefers to go back to his village to live life there. But for an educated person like him, it is a waste of his time. In this village, the shooting of a film is also taking place, when the Sarpanch (Suhas Palshikar), arranges crowd, by providing junior artistes and making good money out of it. He also exploits the youth of the village, by paying them some amount and using their services during election time. This situation forms the foundation of the film.

Director Vijay Deokar, who has himself written the script of the film, has tried his best to present simple but realistic lifestyle of the villagers. Lokesh Gupte, in the role of an educated but frustrated youth, has performed very well. One wonders as to why he can’t find good roles in films. Suhas Palshikar perfectly fits into his character. Jyoti Joshi has played the role of his wife in this film. Good support also comes from other artistes like Janardan Parab, Ganesh Yadav, Deepak Karanjikar, Chetan Dalvi and Bhushan Ghadi. Sara Shravan has performed an item number well. Lyrics of the songs in this film are by Mandar Cholkar, while music is by Vijay Gawande.

The film’s drawback is that the events keep happening, without creating the desired impact. Even the entertainment value is limited in the film.  The promotion of the film was just okay; not creating much of buzz. Otherwise the performances are great, and the film does its subject good justice.