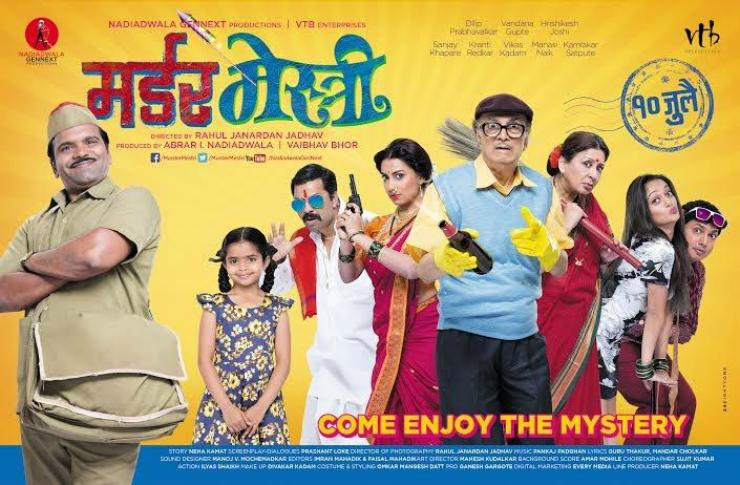 Share this
A writer or director that knows the trick of creating humor from happenstance is one who is able to entertain his audience effectively. Nadiadwala GenNext’s Marathi film ‘Murder Mestri,’ directed by Rahul Jadhav, is based on one such happening.

The film begins with a character of a postman, Prabhakar (Hrishikesh Joshi), who is posted to the village of Sawantwadi. He is always curious; reading the letters received in post office before he delivers them. He even hides some of these letters, for which he is beaten up by the villagers. In spite of this bad experience he reads one more letter, which carries a message about a plan for the murder of Madhav Mestri, living in Sawantwadi.

He then goes to caution the concerned person, but he comes to know that there are three people with the same name living there. One of them is a young, newly married person (Vikas Kadam), the second is a former village head (Sarpanch) and the third one is a retired doctor (Dilip Prabhavalkar) , who has come to this place to spend the rest of his life. When the postman cautions all them, all three start suspecting their wives. The audience witnesses some fun-filled incidences arising out of this situation.

The film’s beautiful photography captured by director Rahul Jadhav himself, offers a good feel of being in the Konkan region. The original story of this film is by Neha Kamat, with screenplay and dialogues by Prashant Loke. The dialogues in particular are impressive. Guru Thakur and Mandar Cholkar have written the lyrics of the songs, with music offered by Pankaj Padghan.

The film has some wonderful performances from Dilip Prabhavalkar, Vandana Gupte and Kranti Redkar; something the audience will particularly enjoy in this film.