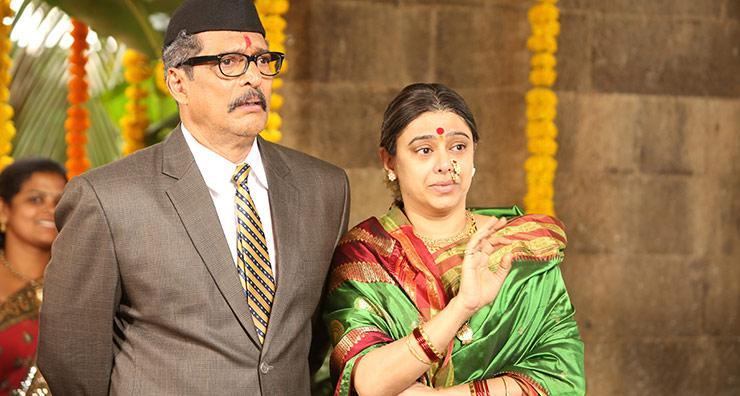 Share this
Some films are meant to make a mark in the history of cinema and Mahesh Manjrekar’s ‘Natasamraat’ is one such movie. Based on the famous play by V.V. Shirwadkar, this movie has effectively managed to portray the life of an aging actor struggling with his life after the fame. Just like Subodh Bhave’s ‘Katyar Kaljat Ghusli’, this film has the perfect balance between the story and the screenplay.
Appa Belwalkar (Nana Patekar), an actor par excellence, retires from the limelight after having performed on stage for forty years. Despite earning fame and name in the world of theatre, Appasaheb is ill-treated by his daughter-in-law (Neha Pendse) who accuses him of teaching wrong things to her daughter. Appasaheb and his wife Kaveri (Medha Manjrekar) leave the house and are offered shelter by their daughter (Mrunmayee Deshpande) who is already married. Appasaheb’s son-in-law (Sunil Barve) treats them with lot of respect. However, the peace is short-lived as Appsaheb’s daughter accuses him of stealing money. Heartbroken, Appasaheb and his wife leave their daughter’s house at night during a heavy downpour.
In the play, the character of Appa had a powerful performance and got to show his acting abilities due to a monologue during the act. The movie does not show this part of Appasaheb, yet his role as the head of family who is shunned by his own family will definitely move the audience. Mahesh Manjrekar has done full justice to the movie and the characters of the film. Not one moment goes which does not touch the heart and emotions of the audience, especially the later half.
As is expected, Nana Patekar gives a performance which brings for the pain and angst of Appasaheb’s character to the fore. This is one of his best performances of his career. Medha Manjrekar has provided an equally strong performance which adds to more substance to the film. She definitely deserves more such roles. Mrunmayee Deshpande has given a great performance and has proved that she is one of the most talented young actresses of today. Neha Pendse, Ajit Parab, Sunil Barve, Jaywant Wadkar have given justice to their respective roles. Vikram Gokhale has given another exemplary performance of his career. Apart from superb performances, it is also a technically well presented film. This is a definitely must watch film, which must not be missed at any cost!