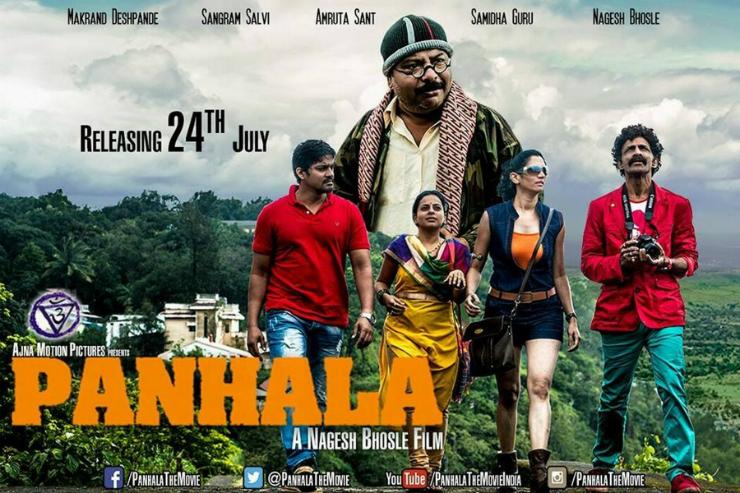 Many a times, the title of the film itself suggests its context, presentation and style. Nagesh Bhosale’s recent offering falls in this category. The film’s story is set against the backdrop of the historical Panhala fort, near Kolhapur. It revolves around two couples who are on a visit to this place, as well as a local guide who briefs them about the history of this fort. While a story unfolds about the relationship of these two couples, the film goes on to show the audience the picturesque location around this fort.

In the film, we find one tourist couple (Makarand Deshpande and Amruta Sant) meeting another couple (Sangram Salvi and Sameedha Guru) at this place. The first couple, being artistes, has come there to capture the beauty of the fort, but the husband is annoyed with his wife for hiding something from him. During this tour, the husband (a photographer) notices a strange happening between another couple; where the husband is trying to kill his wife. But he doesn’t capture a photo of that incident. Why doesn’t he take the picture that could make the difference? While revealing this mystery, the screenplay loses a little of its appeal.

Besides the story, the film lays ample emphasis on the greenery around the fort, but at the same time retains its strong focus on the historical importance of the place. A lot was expected from the story of this film, which is penned by team of four writers comprising of Vidyasagar Adhyapak, Arwind Jagtap, Umesh Padalkar and Vilas Padalkar. However, that desired impact was not noticed in the screenplay. However, Cinematographer Amarendra Bhosale has done a wonderful job while capturing the beautiful locations through his camera, giving audiences a realistic feel of the place.

Balkrishna Guide (Nagesh Bhosale) does a commendable job, taking the couples and the audience into the crux of historical aspects, narrating interesting tales of Shivaji Maharaj, Shiva Kashid, Siddhi Johar and Juhunzarrao. In the film, the connection between the tales of Balkrishna and the happenings in the lives of two couples are not linked strongly enough. But Nagesh Bhosale has shown some admirable skills of direction in a few important scenes. He has also moved in front of the camera with ease. Even Makarand Deshpande does invite significant attention, through his character of a photographer who is deeply involved with his work.

Whether you have visited Panhala Fort or not, you can surely give this film a watch. It will not disappoint you.