Share this
Produced by a group of four producers Anup Kumar Poddar, Aman Vidhate, Sanjay Sankla, Mulchand Dedhia and directed by Ankur Kakatkar, latest Marathi film ‘Premasathi Coming Suun’, is an interesting  romantic comedy. The film does possess the required content to generate a lot of laughs with a chain of humour filled sequences.
Aditya Gupte (Adinath Kothare) a young bachelor from a well to do family, is very much attached to his grandmother (Suhas Joshi). On her recommendation, he agrees to marry Antara (Neha Pendse) a beautiful girl, who has been brought up by her uncle and aunty (Vijay Patkar and Resham Tipnis) since her childhood. Actually, Aditya’s grandmother, who doesn’t find any mode of transport, is offered a lift by Antara, on her scooter and that’s how, she is impressed by Antara’s nature.
Aditya and Antara get married. But, on the first night after marriage, Aditya is given a task by his wife, which prevents him from coming closer to her. Next day morning, when he wakes up, he finds Antara missing. Later, Aditya and his family is shocked to discover that they have been cheated. But, the grandmother is not ready to believe it. Aditya promises his grandmother  that he would bring his bride back home. He goes on his own to locate her. Parallel police investigations reveal that Antara has not only cheated Aditya, but also two more people, one from Pune and other from Aurangabad.
Actually, Antara, who keeps changing her names like Akshata, Anamika and so on, does so at the behest of her Uncle, Aunty and cousin brother, as she is under their obligation. But, their latest target Samrat Kolte Patil, a rich but weird ‘would be bridegroom’ proves to be a wrong choice. They have no other choice but to get Antara (who has changed her name to Akshata) married to the dangerous looking Samrat. But, Aditya manages to reach this place, by posing himself as event manager. With more interesting sequences which follow, after his arrival; the film takes you to a typical climax, noticed in many romantic action comedy type of Hindi films. Needless to say, that all is well at the end.
Debutant Ankur Kakatkar, who is basically from Marathi theatre, has managed to create humour very efficiently, in this well written script of Chinmay Kulkarni. Full marks to him for his clever direction. The only drawback in the screenplay is the non convincing reason given by Antara for cheating people and the typical climax shot towards the end. Otherwise, this entire two hour long romcom offers entertainment with a difference. Performances by all the artistes, including the lead pair, is a real treat to Marathi film lovers. Both Adinath and Neha prove a perfect choice for their respective roles. But, Jitendra Joshi is simply superb! Right from his entry into this film till the last scene, he steals the show. He is sure to find his nomination in best supporting actor’s category for all popular awards to come next year.  Good support comes from veteran Suhas Joshi, Vijay Patkar, Resham Tipnis, Madhav Abhyankar and others which help the film to make a mark.
Film’s wonderful cinematography by Prasad Bhende, good music by Pankaj Padgham and fine art work by Ajit Reddy are the other plus points of this entertaining film. If you have enjoyed watching romcom action films like  Bunty aur Babli (Hindi) and Poshter Boyz (Marathi), this film will not disappoint you. 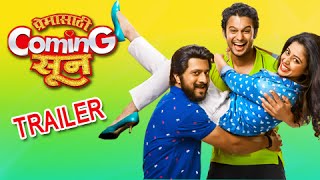