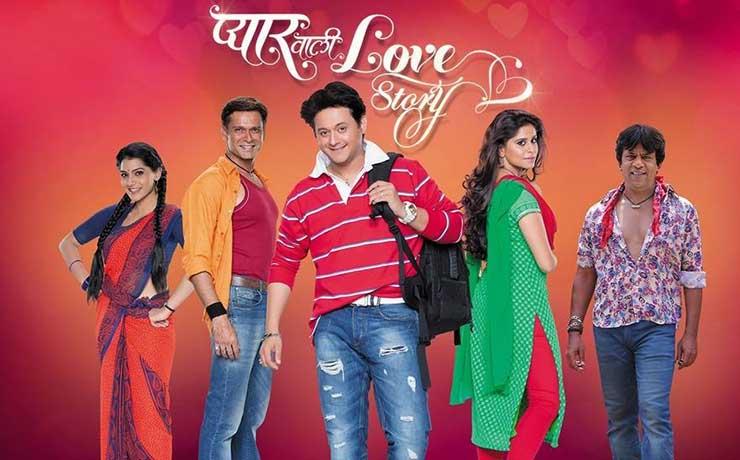 Share this
After ‘Duniyadari’ attained popularity with super hit success, there were big expectations from film maker Sanjay Jadhav’s next film. Now, Sanjay is back with another love story, suitably titled ‘Pyar Vali Love Story’.
If we compare ‘Pyar Vali Love Story’ with ‘Duniyadari’, there is one big difference. ‘Duniyadari’ was based on literary work of Suhas Shirvalkar and hence Sanjay Jadhav could take the liberties to give that story a cinematic form. But, ‘Pyar Vali Love Story’ is Sanjay Jadhav’s own story, which he has set on the backdrop of 1992 communal riots in Mumbai. While doing so, he has presented a love story of a Hindu boy  and a Muslim girl, while delivering  a social message.
‘Duniyadari’ was set on the backdrop of 80s period and ‘Pyar vali...’ is set during early 90s period. And this clearly indicates that the director is more keen on taking up stories related to particular period. After directing films like ‘Checkmate’, ‘Ringa Ringa’,’Fakta Ladh Mhana’,it was ‘Duniyadari’ which brought Sanjay Jadhav name and fame.  Perhaps, that was the reason, he decided to present one more love story.
‘Pyar Vali Love Story’ presents two parallel stories. The first one is between a Garage owner Pashyabhai in a chawl and a street-smart and blunt girl Nandini , living in the chawl. When their marriage takes place, Pashyabahi’s younger brother Amar arrives in the chawl and then begins another love story between Amar and Aliya, a muslim girl( Sai Tamhankar)  living in the neighbourhood. Aliya’s brother Kadar (Upendra Limaye) who is also good friend of Pashyabhai, fixes the marriage of his sister with Inspector Alam (Chinmay Mandlekar) . when Kadar comes to know about his sister’s relationship with Amar, he warns him and even beats him.
In the meanwhile, communal riots break out and Inspector Alam is killed. Kadar suspects Amar and vows to take the revenge. Amat and Aliya who are intensely in love, manage to run away from the scene.  The film is entertaining in the first half. But, in the second half it fails to move further, with required speed. And, that is disappointing!
All the artistes in the film have given wonderful performances. And, that is the biggest plus point of this film. Sai Tamhankar is showing maturity through her performance, with every new film. Urmila Kanitkar has played the the street smart bold girl very well. Swapnil Joshi looks very comfortable in this role and has played his part extremely well. Sameer Dharmadhikari looks smart, in his different role of Pashyabhai and so is Upendra Limaye impressive as Kadar. Good support comes from others like Nagesh Bhosale, Ila Bhate and Namrata Kadam.
The film’s songs have already popularised; which has helped the film in a big way. The dialogues of the film are well written to pass a timely message, on many occasions.  All in all, ‘Pyar Vali Love Story’ is an entertaining film, though it lacks the desired punch. Not a bad idea to watch this film once.