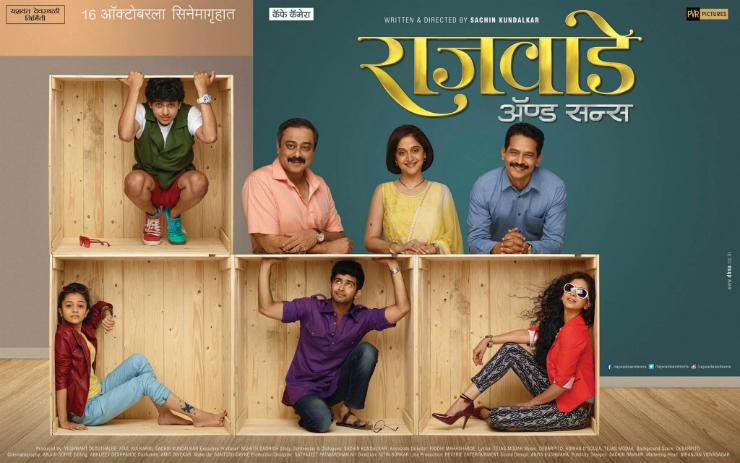 When a reputed director releases his film, we are well aware that he will be offering something different. However, not all such experiments are successful. Sachin Kundalkar’s past record suggests that his Marathi films ‘Gandh’ and ‘Happy Journey’ were really good; but his Hindi films ‘Aayya’ and ‘Restaurant’ went unnoticed.  ‘Rajwade & Sons’ is his first family film, which shows the gap among three generations.

The story of this film is set in Pune. We see a big  joint business family of the Rajwades vacating their old house for the construction of a multi-storey building. Rameshrao and Sushila Rajwade (Satish Alekar and Jyoti Subhash), the head of the family and his wife, live with their three children and grandchildren. All of them shift to a big apartment.

It is because of the strict and disciplined Rameshrao, there is no freedom for anyone in the family. But when Vikram (Amitriyan Patil), Rameshrao’s fourth son, returns home after several years, the atmosphere in the house changes. The children in particular, are happy to be in his company. Laxmi also becomes a little more liberal by granting permission to her daughter to pursue a modeling career, against the wishes of the head of the family. Shubhankar shows his true colors; but he justifies his behavior. With many more such happenings, the family drama unfolds at a pleasurable pace.

Sachin Kundalkar has handled three important departments of this film; i.e. story, screenplay and direction. This has helped him convey what he wanted, in his own style. He has described the attitudes of people representing three generations very well. He has received good support from the efficient editing by Abhijit Deshpande and good lyrics and poems of Tejas Modak. Other notable mentions are from the music team of Debarpito, Edrian D’Souza and Tejas Modak. Producers Yashwant Deosthali, Sachin Kundalkar and Atul Kulkarni have combined well to offer a family entertainer with a message.

However, having shown the elite family and their lifestyle, it remains to be seen, how the middle class audience is going to relate themselves to the hi-fi characters in this film. Also, while watching this film, sometimes you feel like you’re watching a play. This is the only drawback  of this film, otherwise, a good fare to watch with the family!