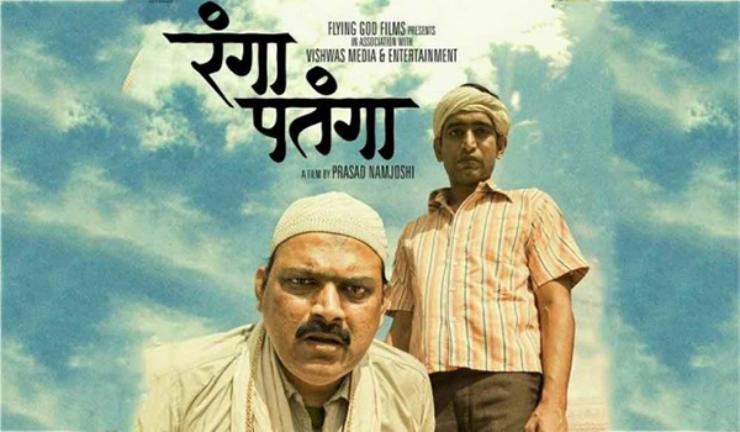 Name of the Film: Ranga Patanga

Marathi films have a lot of content based on rural subjects. Nowadays, we find more realistic Marathi films, on rural backdrop. Latest Marathi film, Ranga Patanga directed by Prasad Namjoshi, falls into this category. The film has presented the true picture of rural Maharashtra in a humorous manner. In the process, the role of administrative system and the competition among the electronic news channels to increase their TRP, is also highlighted through turn of events, in the screenplay of the film. It will probably reming you of a humorous Bollywood film, Peepli Live, if you’ve got a chance to watch it.

The story of the film begins, with Jumman, a poor farmer, whose pair of bulls Ranga & Patanga go missing.  Jumman begins searching them, with the help of his close friend Popat. But, when the reporters of a News Channel arrive in this village in search of news, they find Jumman’s story more interesting.  And that pressurizes the state administration.  In the meanwhile, you also notice the race among different news channels, to get a closer look at the case.  What is important is that towards the end, you come to know the truth behind the missing of bulls and the happiness noticed on the face of Jumman, has been well captured.

Makarand Anaspure has portrayed a serious type of role and he has proved that he is also good at playing such roles. His wife’s role is well played by Nandita Dhuri.  In the role of Popat, Sandeep Pathak is at his best, and quite humorous. Sandeep’s wife is played by Gauri Konge. One song presented in two forms, i.e. a Gazal and a Quawwali is a good experiment. The film succeeds in offering the glimpse of rural Maharashtra in a witty manner. A certain part of the film is emotional enough for the audience to shed tears. Overall, Ranga Patanga is quite an entertainment.